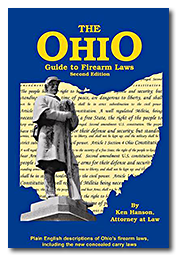 Click the "Add to Cart" button below to ORDER your copy now.

If you carry concealed, keep a gun in your home, or transport firearms between your home and a shooting range, club, or hunting area, YOU NEED THIS BOOK!

Written by Ken Hanson, The Ohio Guide to Firearm Laws is the DEFINITIVE reference. This 5th edition (2016) provides simple but comprehensive coverage of Ohio's gun laws ...

PLUS this must-read guide brings you up-to-date on significant changes that you need to know ...

In addition, Ken explains Cleveland's current efforts to pass gun control and the likely outcomes. And you'll get a primer on R.C. 9.68 dealing with the difficult question "If Ohio doesn't have preemption, what exactly does Ohio have?"

Whether you're a private gun owner, firearm instructor, law-enforcement officer, gun dealer, or anyone concerned about understanding and complying with Ohio gun law, this is THE book on Ohio gun law. In simple English, you'll get a better understanding about how the law affects you every day.

Click the "Add to Cart" button below to ORDER your copy now. 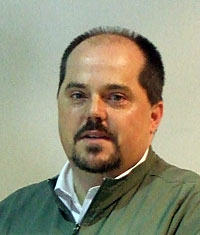 Ken Hanson, Esq. was a former assistant prosecuting attorney and public defender. Hanson was recognized as the go-to authority on Ohio gun law and worked directly with Ohio legislation, legislative aides, representatives, senators, the attorney general’s office, and the media on firearm issues, legislation, and cases.

He was an NRA Certified Instructor in multiple disciplines and acted as a legal trainer for other concealed carry instructors. In addition, he lectured community groups and organizations on gun issues and frequently acts as a consultant on political campaigns for sportsmen issues.

Hanson was awarded the NRA-ILA Defender of Justice Award for his extensive pro-bono work to improve and defend gun rights, including notable cases before the Ohio Supreme Court and DC v. Heller, the landmark case before the Supreme Court of the United States.