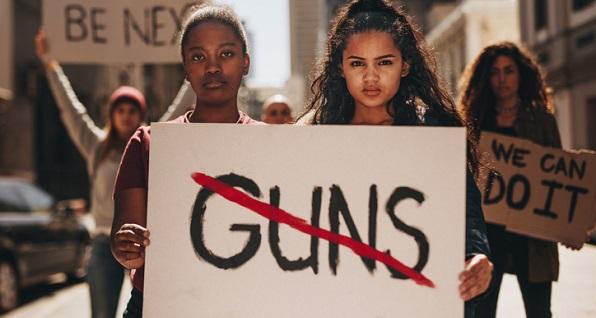 Yes, that title doesn’t make much sense, but neither does a group that promotes banning firearms starting a national organization called Gun Owners for Safety. Nonetheless, The Hill recently reported that the anti-gun group Giffords is doing just that. This effort is being sold as an expansion of the group’s campaign to fool gun owners at the state level into supporting an agenda that is clearly against their own interests.

Giffords has been working on establishing what it calls Gun Owners for Safety State Chapters since at least January 2019, and claims to have three under its wing. The states it mentions, Colorado, Minnesota, and Texas, all have groups called Gun Owners for Safety, but one called Colorado Gun Owners for Safety makes clear that the group is NOT affiliated with Giffords, and does NOT support creating new laws that impose greater restrictions on law-abiding gun owners.

Anti-gun advocates attempting to create a “new” organization that attempts to disguise its gun control agenda is nothing new, of course. Giffords, as well as many other anti-gun groups, have a long history of rebranding themselves in order to deceive Americans into believing their agenda isn’t simply promoting more and more gun control laws.

Even back when Giffords was known as Americans for Responsible Solutions (ARS), the organization promoted rebranding its anti-gun agenda. Based on focus group feedback, for example, the group began telling its anti-gun supporters to stop promoting “gun control,” and start using terms like “gun violence prevention.”

Apparently, they now believe that calling an affiliated group Gun Owners for Safety will lull some gun owners into believing they can be trusted to not impose onerous restrictions on them.

But just putting “Gun Owners” and “Safety” in your name really doesn’t cut it for most politically savvy supporters of the Second Amendment. There may very well be some gun owners in this new iteration of a gun control group, but considering it has no firearm safety programs, how can it honestly put “Safety” in its name?

And the new group is rather selective when it comes to supporting gun owners, if it actually supports any, as Giffords supports banning countless semi-automatic firearms, as well as standard capacity magazines. If you own either, then the group clearly doesn’t support you as a “Gun Owner.”

If that were not enough to convince you that this new venture from Giffords is a disingenuous sham that does not truly support “Gun Owners,” the parent organization has even taken positions against muzzleloaders.

Ultimately, the group is designed to eliminate all of its members, though, as Giffords is also opposed to the Protection of Lawful Commerce in Arms Act (PLCAA). The PLCAA, of course, was passed to protect the lawful firearms industry from being driven into bankruptcy by reckless, predatory lawsuits. No gun industry means no new guns.

One of its more prominent mouthpieces even ridiculed people who were buying guns for protecting their families during the recent surge in firearms sales, suggesting they were afraid of “zombies.” Of course, the surge has been caused by rampant uncertainty during the recent pandemic, as well as an outbreak of riots and looting in several cities across the country. When people are concerned that they may need to be ready to defend their lives and the lives of their loved ones, it is only natural that they turn to exercising their rights protected under the Second Amendment, regardless of what an anti-gun lobbyist might think.

Speaking of the Second Amendment, this new branch of Giffords claims: “As gun owners, we take our Second Amendment rights seriously. Gun ownership has always been a part of who we are in America—a fundamental right for generations of people from all backgrounds and political affiliations.”

That might sound reassuring, but this is the same Giffords that joined with the anti-gun lawyers organization called the Legal Community Against Violence (LCAV) in 2016 when Giffords was known as ARS. The next year, this legal branch of Giffords became known as the Giffords Law Center to Prevent Gun Violence. So, what does the legal arm of Giffords think about the Second Amendment?

Prior to the 2008 landmark Supreme Court ruling in District of Columbia v. Heller, LCAV supported the “collective rights” interpretation of the Second Amendment, and filed an amicus brief in support of the D.C. gun ban that the Heller decision struck down. In 1998, one-time LCAV Legal Director Juliet Leftwich wrote in a piece for the San Francisco Chronicle titled, “2nd Amendment Argument Is Myth,” that described the notion that the Second Amendment precluded certain gun control measures as “NRA propaganda.”

In a 1995 document available on the Giffords website as recently as last year, LCAV contended:

The Second Amendment was written to ensure that every state would have the ability to maintain its own militia. It was not, as the gun lobby argues, intended to establish an unlimited, private right of gun ownership or possession. If the drafters of the Bill of Rights had intended to guarantee such an individual right, they could (and would) have done so.

After we exposed this clear conflict with the newly embraced position of “(taking) our gun rights seriously” last year, Giffords apparently spent some time scrubbing its website of most information exposing its hypocrisy.

Although the LCAV failed in its opposition to the Heller decision, and Giffords, for now, acknowledges the ruling “clarified an individual’s right to have a handgun in the home for self-defense,” one would be hard-pressed to find any mention of actual support of the right to have firearms for self-defense anywhere on the Giffords website.

Instead, Giffords talks about “hunters, sport shooters, and collectors,” while promoting propaganda that is clearly opposed to the concept of using firearms for self-defense, like their anti-gun piece called “The ‘Good Guy with a Gun’ Myth.” This screed makes the ridiculous claim that “guns make states and people less safe—not more.” If that were actually true, then a more logical name for a group that calls itself “Gun Owners for Safety” would be “Former Gun Owners for Safety.” After all, if you believe “guns make…people less safe,” how could you possibly justify owning a gun, while claiming you are for safety?

Clearly, this latest attempt to appear to be on the side of gun owners, at least some of them, is as dishonest as the fake hunting groups anti-gunners use to try to prop up anti-gun politicians with proven anti-gun records. If a group calls itself “Gun Owners for Safety,” but has no actual firearms safety programs, promotes the lie that “guns make…people less safe,” and works to eradicate law-abiding gun owners by promoting actual gun bans and driving the firearms industry into bankruptcy, it simply cannot live up to any aspect of its focus group driven name.