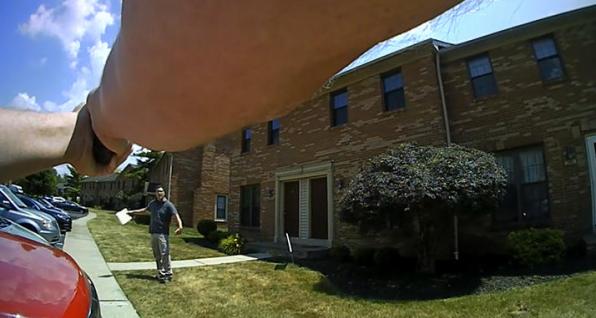 WOSU (NPR Columbus) reported recently that a special agent with the U.S. Bureau of Alcohol Tobacco and Firearms is suing the Columbus police department after a July 7, 2020 incident in which Columbus police officers handcuffed and tazed him. The entire incident was caught on body cam.

According to the suit, the ATF agent was trying to confiscate an illegally-held firearm when the suspect called 911 and the dispatcher sent officers Joseph Fihe and Kevin Winchell.

The footage shows Columbus police officer Joseph Fihe arrived first on the scene. As soon as he sees ATF agent James Burk, Fihe tells him to put his hands up and then pulls his gun.

Burk repeatedly identified himself as a federal agent, and tells Fihe he will not get on the ground. He offered to show Fihe his badge, but Fihe tells him to keep his hands in the air.

Another Columbus police officer Kevin Winchell then arrived on the scene, and also trained his gun on Burk. They again ordered him to the ground.

Burk complied but instead of checking his badge, the officers attempted to handcuff him. Burk pleaded with the officers who held him face down on the sidewalk. His glasses fell off onto the ground.

Fihe tazed Burk, and after he put handcuffs on him, the officers got Burk's identification out of his pocket.

However, instead of releasing Burk, the officers forced him into the back of a cruiser until other officers arrived.

The article goes on to report that Burk has filed an excessive force lawsuit in federal court against the city of Columbus and the two police officers.

Burk admits this sort of confusion isn’t unheard of. However, in a typical situation, he says, the police officers would have checked his credentials and then either assisted with retrieving the firearm or left the scene.

Columbus police are also facing scrutiny over a recent case in which an unarmed man was shot to death in the garage of a home where he was staying as a guest. Body cam footage reveals the officers neglected to administer first aid to Andre Hill, who bled to death as he waited for EMTs to respond. Police Chief Thomas Quinlan has said he "can't defend" the Hill shooting.