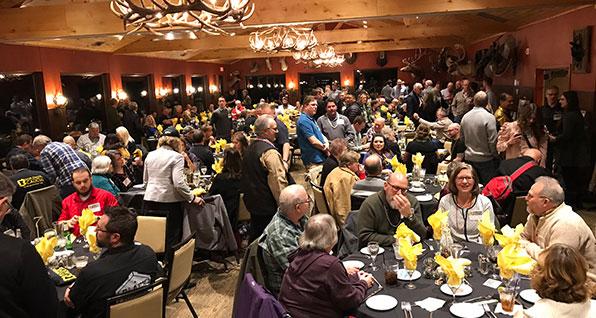 Buckeye Firearms Association (BFA) focuses most of its efforts on fighting for Ohio gun rights. However, we know that what happens in one state affects what happens in other states. So we have always been generous about helping fellow 2A patriots no matter where they are located.

That's why Administrative Assistant Angela Armstrong and I traveled to the Land of 10,000 Lakes to help our friends with the Minnesota Gun Owners Caucus host their first annual banquet to raise funds for the Minnesota Gun Owners Support Fund, an affiliated 501(c)(3) public charity that supports education initiatives, youth programs, and Second Amendment litigation.

The event took place at the Minnesota Horse & Hunt Club in Prior Lake on December 5, 2019, and attracted a sell-out crowd of well over 200 enthusiastic supporters, including several local lawmakers and VIPs. Attendees enjoyed a Prime Rib dinner and participated in raffles and a silent auction to take a chance to win guns, gear, and a wide assortment of donated artwork, collectibles, tools, and household goods.

I was impressed with how organized the event was and how enthusiastic the Caucus's volunteers were. You can tell they care deeply about their rights and have a close relationship to their thousands of supporters, who braved the cold on a weeknight to attend this fundraising dinner.

Buckeye Firearms Association wishes our friends in the State of Nice continued success as they fight the good fight for Second Amendment rights. And if you live in Minnesota, please consider joining the Minnesota Gun Owners Caucus to support their work on your behalf.