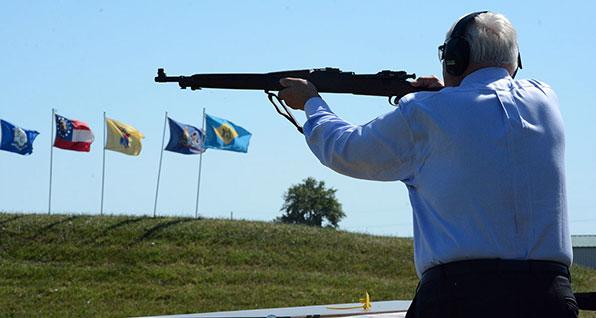 CAMP PERRY, Ohio – On the beautiful, sun-filled morning of July 12, the Civilian Marksmanship Program (CMP) hosted the opening event of the 2022 National Rifle and Pistol Matches – the First Shot Ceremony.

The First Shot serves as a welcoming for guests, participants, volunteers and staff eager to start the annual National Matches – held at the Camp Perry National Guard Training Facility. The Matches have assembled marksmen and women at Camp Perry since 1907 and has grown to feature several highpower, smallbore and long range rifle, as well as pistol and air gun events, to thousands each year.

As visitors lined up along the Lawrence Road Shooters' Plaza by Camp Perry's Rodriguez Range, an authentic B-25 bomber, Georgie's Gal, blazed through the perfectly blue skies above. The aircraft was provided by Port Clinton's Liberty Aviation Museum and made multiple passes overhead, displaying its timeless features. Pyrotechnics by cannon master Bob Gillmor and the Ohio National Guard's Chief Kyle Gettys exploded on the range below to simulate World War II bombs as the plane passed by – thrilling guests on the ground.

When the visuals were over, the Color Guard raised the stars and stripes on the Plaza as Ohio National Guard Chaplain Nicholas Chou gave the invocation. Music was provided thanks to the 122nd Army Band, while Adjutant General of the State of Ohio, Major General John C. Harris, greeted those in attendance at the podium.

Distinguished emcee of the ceremony, CMP chairman and CEO, Judy Legerski, led the festivities – introducing guest speakers and emitting her own reflections on the Camp Perry.

Legerski also spoke to the scale of the National Matches, ensuring a place for everyone on Camp Perry's ranges, regardless of background.

"It's highly rewarding to see a large number of veteran competitors who set their egos aside and share their methods with up-and-coming juniors and adults who are struggling to improve," she said. "Good shooters give back to make everyone better."

"If you are new to the CMP, you are in good company with many like-minded participants who enjoy competition and the camaraderie that comes with this sport," she said proudly.

Legerski also familiarized the crowd with her colleagues and honored guests, the First Shot speakers: CMP's Board Treasurer, Jon Bengston, and CMP's Board Secretary, Harry Sieben. Both men are retiring in 2022 after long and unforgettable careers as members of the CMP Board.

For the first time in the ceremony's history, two First Shots were taken. Bengston used a 1903 Springfield rifle as Sieben fired a M1 Garand rifle. Before their ceremonial shots downrange, each made remarks to the crowd.

Sieben spoke of the evolution of the CMP through its 100-year legacy – briefly describing its origins through President Teddy Roosevelt into what marksmanship has flourished into today.

"There have been many careful decisions that have made the effort successful, including modern improvements you see here on the range at Camp Perry," Sieben said. "The introduction of electronic targets in many CMP competitions . . . raising the sport of air rifle and air pistol to unheard-of levels. These things did not just happen – they were carefully thought out and planned by leaders."

He went on to recognize those leaders, such as President Roosevelt and more modern Congressional advocates like Ohio's Bob Latta, who has served as a Republican representative for over a decade and is a regular competitor during the National Matches, as well as Democratic representative Marcy Kaptur, who is the longest serving woman in the history of the House of Representatives (since 1983) and an often attending supporter of the National Matches.

Sieben also mentioned CMP's own Director of Civilian Marksmanship (DCM) Emeritus, Gary Anderson, who is an Olympic gold-medalist, author and active instructor at many CMP events, along with CMP staff, Board members and current DCM, Mark Johnson, who are all helping to guide CMP programs into the future.

When his remarks were finished, Sieben jokingly introduced "the second best shooter at this First Shot Ceremony," Bengston, who gave his own comments.

He kept his statements short – speaking on the importance of the relationship between the CMP and the Ohio National Guard in upholding the National Matches.

"These competitions are founded on marksmanship – real marksmanship – not just shooting. It is the foundation of these Matches." he said. "Everyone comes to Camp Perry to learn, practice, compete, teach and support marksmanship . . . a skill that can only be acquired through practice. No one is a born marksman."

He also spoke to the traits that make the National Matches exceptional – welcoming competitors of all skill levels to join together on the celebrated ranges that have accommodated some of the best shots in American history.

"This is the time and place where participation by all enter into a special community with shared values, a shared heritage and unique personal bonds," he said. "It is truly a special experience."

Along with Bengston and Sieben, another Board member retiring in 2022 includes Judy Legerski herself. The group will be taking 85 years of combined experience with the CMP as they go, with a fresh group of Board members hard at work expanding CMP's already notable footprint in the marksmanship world. Mr. Denny Lord, Special Projects, was also in attendance for the ceremony and will retire in 2022.

"It's been a real ride," Bengston said of his retirement. "I will miss it, but it's absolutely time, and I'm absolutely blown away with the quality of the Board we've brought in to go on. They're absolutely outstanding."

As for what Sieben is looking forward to in his retirement, "Well, I have seven grandchildren…" he said with a laugh.

With the first shots taken, Legerski concluded the First Shot Ceremony by speaking the words everyone was waiting for: "The National Matches are officially underway!"

View a video highlight of the First Shot Ceremony at https://youtu.be/4yzHYQyU-70. Photos may be viewed at https://cmp1.zenfolio.com/p15052467.

Though the Camp Perry National Matches have begun, it's not too late to join in on the fun! The Matches run through July and will conclude on August 13. Each phase is open to spectators, free of charge. Learn more and view a full schedule of events on the CMP website at https://thecmp.org/cmp-national-matches/.