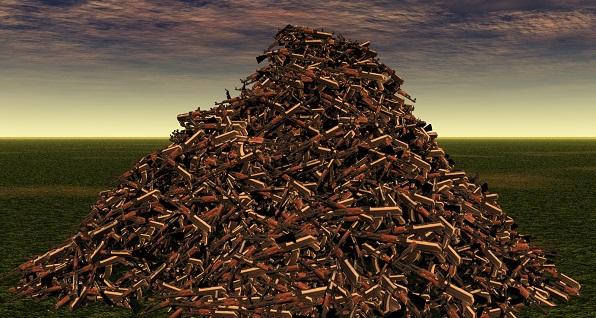 It is interesting to watch certain Democrats struggle when trying to convince law-abiding gun owners how “reasonable” it is for the government to take away your firearms. Do the anti-gun groups and candidates pushing confiscation honestly believe you’ll be fooled?

The Democrat plan to confiscate your firearms isn’t in question. In fact, the plan was laid bare by Robert Francis O'Rourke when, during the third Democrat Presidential Debates, he proclaimed, "Hell yes, we're gonna take your AR-15, your AK47…." Prior to this broadcast, most Democrats were more subtle, promoting what they euphemistically called a "mandatory buy-back" program for most semi-automatic rifles, shotguns, and handguns (so-called "assault weapons"). In the hope of capturing voters, they opted to soothe instead of share, and continually shied away from admitting the true goal: confiscation.

But as the saying goes, if it looks like a duck…

Leading up to the fourth Democrat debate, the effort to disguise confiscation as something else continued. Pete Buttigieg, the Mayor of South Bend, Indiana, complained in an interview with Snapchat's Good Luck America about the Democrats’ "fight over confiscation," which was distracting from other, more palatable infringements on your Second Amendment rights. Buttigieg's comment seemed to be a continuation of his spat with O'Rourke earlier this month in Las Vegas.

After the Good Luck America interview was released, another Democrat presidential "hopeful," New Jersey Senator Cory Booker, decided he needed to chastise Buttigieg for simply telling the truth. Booker tweeted, "Calling buyback programs 'confiscation' is doing the NRA's work for them, @PeteButtigieg — and they don't need our help." Interestingly, Booker didn't challenge the idea that "mandatory buyback" schemes, which he proudly supports, and confiscation are really the same thing. His complaint was over the accepted terminology for confiscation, not the confiscation itself.

Of course, part of NRA's "work" is exposing the lies of the anti-gun movement, and bringing the truth to light. We welcome any "help" in that arena, even if it comes from hyperbolic Democrats who fundamentally misunderstand firearms. Buttigieg may be wrong about promoting other anti-gun policies, but at least he is honest about another Democrat’s desire for confiscation.

To be clear, though, he hasn't said that he is entirely opposed to confiscation. He's merely said he is opposed to talking about it right now.

And that kind of makes sense, politically. The four Democrat candidates that are leading in the polls--Massachusetts Senator Elizabeth Warren, Vermont Senator Bernie Sanders, former Vice President Joe Biden, and Buttigieg--have all referred to supporting a "voluntary buyback" scheme, rather than confiscation. Booker, O'Rourke, and California Senator Kamala Harris have all called for confiscation, and are all struggling in the low- to mid-single digits.

[D]uring the fourth debate, banning AR-15s and other "assault weapons" was again brought up. And the sparks flew between Bittigieg and O'Rourke.

Moderator Anderson Cooper asked O'Rourke how his "mandatory buyback" would work if, as O'Rourke has claimed, police would not be going door-to-door to confiscate firearms. After insulting every single lawful owner of an AR-15 by claiming their firearm is a "potential instrument of terror," "Beto" then stated he expects everyone to simply follow the law.

And that may very well be the case, for those who wish to remain law-abiding. But those who have malice in mind will not. Those who have acquired the tools of their criminal trade illegally will not. And while NRA strongly encourages gun owners to obey gun laws and work to change those with which they disagree, there are many otherwise law-abiding citizens who, when faced with a law they feel is unjust or unconstitutional, will simply not comply.

Cooper pressed O'Rourke to explain how he intends to treat those who currently own AR-15s and similar firearms, and do not turn them in, if his ban were to become law. The candidate said, "If someone does not turn in an AR-15…then that weapon will be taken from them."

O'Rourke went beyond mere confiscation, though, and offered a chilling, Swalwell-like statement about "other consequences from law enforcement."

Mayor Buttigieg was given an opportunity to speak on the subject, where he made clear that the confiscation plan is not off the table for him. He suggested that if O'Rourke could come up with a more developed scheme, "I think we can have a debate about it." Harkening back to the anti-gun rally in Las Vegas earlier this month, when O'Rourke all but called Buttigieg a coward for not currently supporting confiscation, the South Bend Mayor slapped down the failed Texas Senate candidate when he stated, "I don't need lessons from you on courage."

Before the back-and-forth between Buttigieg and O'Rourke devolved into a full-blown slap-fight, Cooper allowed some of the other candidates on the stage to weigh in on banning semi-automatic firearms.

Senator Booker pretended to be concerned about how the candidates "talk to each other and about each other," then began talking about his gun licensing scheme without talking about the confiscation plan he has already stated he supports.

Minnesota Senator Amy Klobuchar talked about a number of anti-gun proposals, did not say that she specifically opposes confiscation, but has stated in the past that she supports "voluntary buybacks," rather than confiscation.

Senator Warren talked about treating semi-automatic firearms like AR-15s the same as fully-automatic firearms, invoking the registration and taxation scheme under the National Firearms Act (NFA). She also called for an end to the filibuster in the Senate to help ram through gun control legislation.

Senator Harris then grossly underestimated the number of so-called "assault weapons," saying there are only five million, when most estimates put the number at over 15 million for just AR-15s. Perhaps she is trying to minimize the impact her anti-gun efforts will have on law-abiding Americans by lying about how many will be affected. She also repeated her audacious plan of using her executive authority as President to do what has already been done. While she didn't actually say she supports confiscation on the debate stage this week, she has stated support for it in the past.

Former Vice President Biden stumbled through his statement next. He talked about the failed Clinton gun ban of 1994-2004--trying to take sole credit for its passage--brought up registering AR-15s under the NFA--presumably to show he doesn't support confiscation--and spoke of repealing the Protection of Lawful Commerce in Arms Act (PLCAA).

The last candidate given an opportunity to speak about confiscation was former HUD Secretary Julián Castro. He stated he is opposed to confiscation because he does not want to see police going door-to-door to implement the policy, as he expressed concerns over "police violence."

So, while some candidates sparred over what to call the confiscation scheme, others made clear their opposition to it…for now.

While the Democrat debate ended Tuesday night, the debate over what to call gun confiscation continues. In fact, on MSNBC the following day, O'Rourke spoke to Joe Scarborough to make sure everyone understood his position; and his preferred terminology. While Scarborough correctly referred to the plan as confiscation, O'Rourke claimed it was not, and continually referred to a "buyback."

Scarborough labored to get the candidate to admit confiscation is his goal, suggesting a hypothetical Texas rancher who simply does not feel a ban on AR-15s is just or constitutional. In response, O'Rourke said that, as with any law, "there have to be consequences," and in Scarborough's hypothetical scenario, "there would be a visit by law enforcement."

Look, if you have to send law enforcement to someone's house to remove their lawfully acquired property under threat of penalty, you can try to say that's NOT confiscation…

…but it is probably a duck.