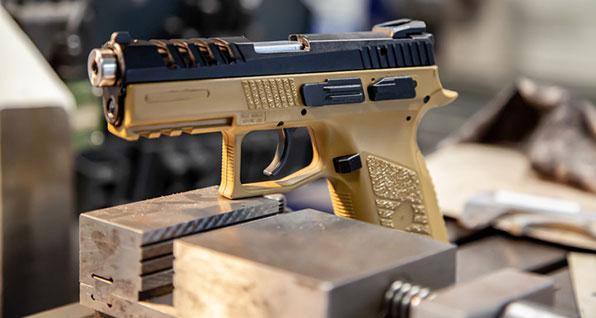 Did Gun Control Just Admit Firearm Manufacturing is a Net Positive for Communities?

A recent column in The Atlantic on the decline and despair of New Haven, Conn., caught my attention. It's an area that many of those associated with the firearm industry are, at least, aware of. For me, it's a little closer to home. It's where my family's roots run deep – both in the city and in the firearm industry.

When I read the author, Nicholas Dawidoff, ;lamented the decline of the city and pined for the days when Winchester Repeating Arms Company had a solid presence, it caught my eye. It was curious to me that a left-of-center publication made the tacit admission that a firearm manufacturer was a pillar that held the city up. When it was gone, the city fell into decay.

It was even more curious when The Trace, the mouthpiece of billionaire Michael Bloomberg's Everytown for Gun Safety gun control group, echoed the author's understated findings. Solid manufacturing jobs were good for New Haven. Dawidoff spoke glowingly of the immigrant and African American heritage that comprised the community and filled the factories. It was a working-class community. It had its struggles, but it was home and it was safe.

"Nobody locked their doors," Dawidoff wrote.

I'm familiar with New Haven then. My grandfather was one of those factory workers. He was among those who found pride in his work and in his community. He retired from Winchester Repeating Arms Company in 1959, the year I was born. He spent 35 years in that factory. This was the same Winchester factory that was part of the arsenal for democracy during WWII and made most of the M-1 Garands for American troops fighting in Europe and the Pacific. I remember him staying in touch with his fellow factory workers in bowling leagues. He was never seen without his Model 94 tie tack. My grandfather collected his service pins marking his years at Winchester, which I am proud to say I still have.

My professional journey in the firearm industry can be largely credited to Winchester. I worked at a small factory in Bridgeport, Conn., that provided stamped metal components to Winchester and Sturm, Ruger and Co. Occasionally, my job would require me to visit the factory where my grandfather worked.

Walking into that old factory where my grandfather worked for so long was a very moving thing for me. We never talked about his work history when I was a kid. It was not lost on me that I was likely the only one in my family to see, hear (and smell) what he experienced in that 100-year-old wooden floored factory. For some reason it created a direct connection to him – even though he was already deceased by this time. It was through this experience, both personal and professional, that lead me to embrace the industry.

I accepted a position at Mossberg in July of 1986, where I worked until I joined NSSF four years ago.

In the mid-80's I would head down Winchester Avenue to meet with the Engineering and Quality folks at their factory without concern. It seems as though everyone in the Hill Section of New Haven either worked at Winchester or was related to or knew someone who worked there. That factory was a great source of pride to that community as I recall: an iconic American brand, iconic logo, and proud employees and retirees like my grandfather.

I also think about the Ruger factory, Marlin factory, Winchester factory, Remington's ammunition factory, etc., that put Connecticut on the map as the leader in innovation. None of these were very far from where Eli Whitney started the mass-production techniques that revolutionized industry.

Things changed. The issues of poverty and crime are complicated. There are lots of reasons why New Haven isn't what it once was, but it cannot be discounted that the city was once the home of a manufacturing giant that produced quality products and employed thousands in a community that thrived. How truly sad it is that so much manufacturing has been chased away from my state.

Political leaders squandered the investments manufacturing made into the state. Governors looking to score cheap political points deflected blame for their own failing policies to confront crime and instead mollified gun control special interests. The firearm manufacturers that called Connecticut home slowly felt like Connecticut didn't value their contributions. Some expanded production to other states, like Mossberg. Some manufacturers folded. Some, like Colt, remain for now.

This is an industry that carries a $70.52 billion economic impact, supporting nearly 376,000 jobs. In Connecticut, that's still $1.4 billion and 5,200 jobs. Firearm sales this year are the third strongest on record, at over 16.4 million. Some states see the value in industry – especially the firearm industry. Georgia, Tennessee, Wyoming and Arkansas are among the states vying to attract firearm manufacturers within their borders. Meanwhile, Connecticut shuns the industry that brought prosperity, good jobs to hard-working families and pride in their communities.

The results, unfortunately, is what Dawidoff sees in New Haven today. Sadly, this great city is not what it once was. I see an acknowledgement that the firearm industry was the glue that held that city together – in a community that used to never lock its doors.

Reprinted with permission of NSSF.