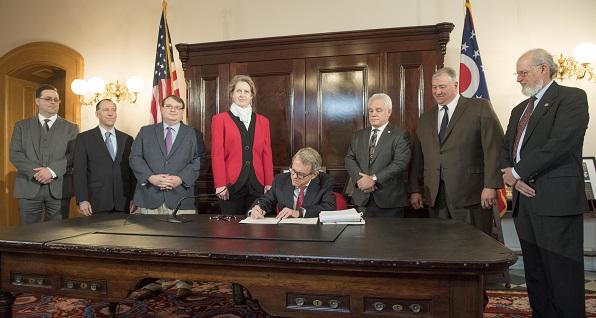 This emergency legislation corrects a drafting error by the Legislative Services Commission (LSC) in the passed version of HB 228 at the end of the last legislative session. It clarifies contradictory language on firearms, specifically what is and what is not “dangerous ordnance.”

HB 86 contains an emergency clause. This means the confusing language from HB 228 is corrected immediately upon the bill taking effect on March 28, 2019. No firearms were ever banned as a result of this swift action by the Ohio General Assembly.

Buckeye Firearms Association began working on this fix immediately upon the error's discovery in December, 2018. By personally working in cooperation with LSC and the Ohio General Assembly, we have ensured that no gun owners will face any legal jeopardy.

“It’s an honor to run a bill that protects our gun rights,” said Plummer. “It’s emergency legislation that protects our deer hunters and sportsmen. I’m proud to stand up and fight for Second Amendment rights.”

While we realize this was a "fix" bill to correct an error, it's nevertheless satisfying to know that our elected officials, along with our new Governor, did not hesitate for a moment to move this bill forward and sign it into law. In legislative terms, this fix moved quickly with little debate or pushback from anyone. We don't expect every bill to move this quickly, but we do hope this to be the first of many bills benefiting gun owners under the DeWine administration.