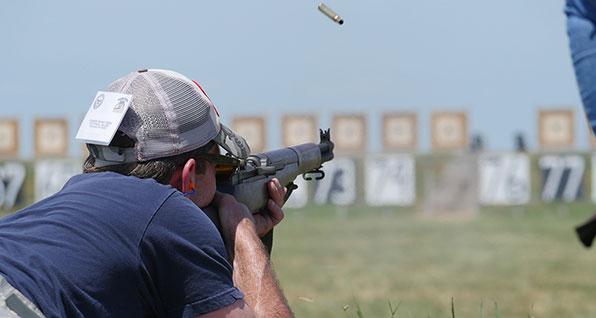 For the shooters of the Civilian Marksmanship Program (CMP), the excitement of returning to Camp Perry for the National Matches is building.

The forced hiatus of 2020 was a bitter pill. Now they are ready to return to the home ground of the competitive rifle and pistol shooting world. It is a certainly a great tradition where some have been coming for generations. Welcoming the shooters this year will be the new Director of the CMP, the former Chief Operating Officer, Mark Johnson was promoted to the position of Director of Civilian Marksmanship. I spoke with Director Johnson about the upcoming National Matches.

Director Johnson: "The National Matches will not look drastically different. We will observe social distancing. The award ceremonies, where groups might gather, will be different with a lot of the medal presentations done on the firing line. We are evaluating each event to determine the need to skip any firing points on the line. We are doing our best to make the event safe. We have not made a decision regarding masks but will make that decision closer to the event date. We pride ourselves on safety and these considerations are part of that decision. Camp Perry is an Ohio National Guard (ONG) facility so that is the major factor in determining what must be done. We will cooperate and follow the directions of the ONG. We normally have about 4500 shooters, and based on early registration, it appears the numbers are up. Everyone is excited to return to Camp Perry."

One concern of many shooters, both competitive and casual recreational shooters, is the availability of ammunition and reloading components. "We've seen good participation numbers so far this year. We do hear that folks are concerned about replacing the ammunition that they have used in matches. I don't know that is drastic enough for shooters to not participate. The registration numbers don't indicate that is the situation. There is no question that ammunition and components are very difficult to get right now. Hopefully these issues will resolve themselves and we will not see a crisis that could cause a decline in marksmanship participation," Director Johnson noted.

In addition to hosting competitive events, the CMP is reaching out to new gun owners with training programs. The Director explained, "We certainly want to reach out to new shooters. We have weekly instruction classes for all disciplines at Talladega. These are geared to teach first time gun owners or increase the skill set for the novice shooter. We want an opportunity to teach safety and marksmanship with their firearm. We hold rifle and pistol 101-classes throughout the U.S. We will be adding small bore and shotgun training. We recognize that we have not bridged the gap between the new shooter and building them into a competitive shooter."

The future certainly looks bright for the CMP and the Camp Perry National Matches. Johnson elaborates, "The Ohio National Guard is doing a lot of reconstruction. Over the next several years all the housing will be newer. The campground is only about five years old. It's exciting times at Camp Perry. We are very pleased with the regeneration of Camp Perry since 1996. The ONG has been a very good partner".

The Camp Perry National Matches begin July 12 and run through the month. Visitors are welcome and the air rifle range is open to the public during specific hours. For more information about the National Matches, the history of the CMP and visiting Camp Perry click here.