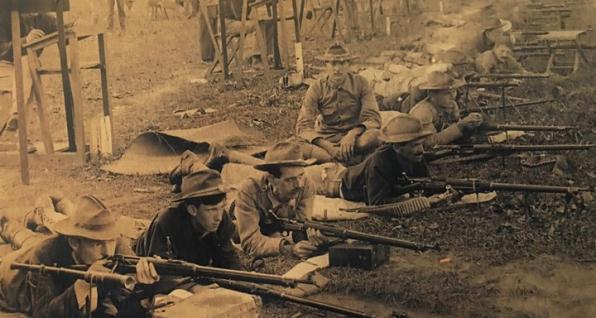 "In the year 1907 the machinery of the National Matches, now grown to immense proportions, was moved to the mammoth new range at Camp Perry."
—James Drain, Arms and the Man, August 1911

Shortly before the National Matches (or National Shoot as stated for the first time in the match program) commenced on Ohio's new state rifle grounds, the facility was dedicated and named Camp Perry in honor of Commodore Oliver Hazard Perry, hero from the 1813 Battle of Lake Erie. (Official recognition by the state legislature occurred the following year.)

On Aug. 19, 1907 a new era in National Match history began with the firing of NRA and Ohio State Rifle Association matches. Specifically, the first shot of the event was fired from a Krag by Corp. L.B. Jarrett of Indiana at 9:10 a.m. in the Championship Company Team Match. The Leech Cup Match was the first individual contest fired, attracted 327 entries and was won by the prior year's Wimbledon winner, Capt. J.C. Semon of Ohio. While conditions on the first day were considered excellent, they deteriorated rapidly as the second day offered up wind, rain and a 15-degree temperature drop over a period of a few hours, thereby establishing immediately the reputation of Camp Perry as unpredictable and environmentally challenging.

Fortunately, Ammon Critchfield had the foresight of having wood planks positioned throughout the grass-deprived camp to help competitors deal with the muddy swamp-like conditions caused by the rains off Lake Erie.

The appearance of Camp Perry during its National Match debut was crude but functional. Given the short amount of time that Critchfield had to deliver on his promise to have Camp Perry ready for the 1907 matches, those in attendance seemed more than willing to traverse rutted roads and firing lines. They had good reason to overlook some of the undeveloped areas, for it was obviously a work in progress and one worth waiting for. Reachable by an extension of rail from LaCarne on the Sandusky division of the Lake Shore and Michigan Southern Railway, Camp Perry had its own station at the entrance to the grounds and competitors who traveled by train were able to secure a special prize of two cents per mile, although the offer appeared to have been made somewhat begrudgingly since the match program stated there was "agitation between railroads and state law requiring a reduced rate."

Click here to read the entire article at SSUSA.org.