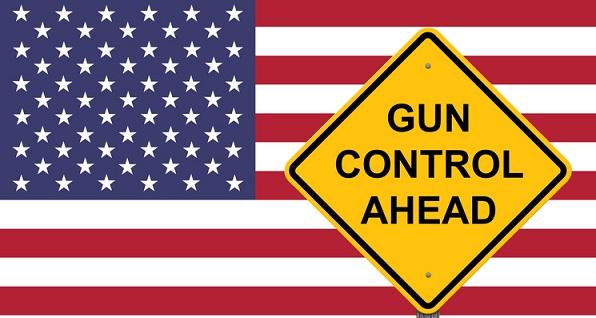 In an odd turn, just before Halloween one prominent gun control group briefly got out of costume.

When former Congresswoman Gabrielle Giffords and husband Mark Kelly launched Americans for Responsible Solutions (now named Giffords) in early 2013, gun owners were assured that the group sought moderate “common-sense solutions” to gun violence. The group admonished NRA for not working to “to find the balance between our rights” and gun regulation. Giffords and Kelly explained, “we don't want to take away your guns any more than we want to give up the two guns we have locked in a safe at home.”

This, of course, was all a marketing ploy. From its inception, Giffords has pushed the same warmed-over gun control policies as their less messaging-savvy peers.

To help their anti-gun allies better deceive the public, in 2016 Giffords put out a gun control messaging manual titled, “A Guide to Understanding and Engaging Americans on the Need for Stronger Gun Laws.” In a section labelled, “The Do’s and Don’ts of Talking About Gun Violence,” the guide made clear to gun control supporters that “Talk about creating a national gun registry, or banning or confiscating guns” was a definite “Don’t.” The group went on to falsely contend none of those measures “are policy priorities or have widespread support among gun violence prevention organizations.”

Not only is a national gun registry a priority for gun control advocates generally, as former Bureau of Alcohol, Tobacco, Firearms and Explosives agent and current Giffords Senior Policy Advisor David Chipman made clear to The Hill this week, it is an explicit policy priority for Giffords.

In response to a question about AR-15 rifles, Chipman responded, “What I support is treating them just like machineguns.”

Reiterating that America’s most popular rifle should be subject to the National Firearms Act (NFA), Chipman went on to state,

To me, if you want to have a weapon of war, the same gun that was issued to me as a member of [the] ATF SWAT team, it makes sense that you would have to pass a background check, the gun would have to be in your name, and there would be a picture and fingerprints on file. To me, I don't mind doing it if I want to buy a gun.

Chipman and Giffords’s preferred policy is similar to that supported by gun confiscation advocate Sen. Dianne Feinstein (D-Calif.). In early 2013, Feinstein proposed legislation that would have subjected tens of millions of commonly-owned semi-automatic firearms to NFA regulation and registration.

While a former federal bureaucrat might not mind navigating the convoluted federal bureaucracy in order to exercise a constitutional right, most should abhor the prior restraint of NFA regulations.

In order to acquire a machinegun, the transferee and transferor must submit a Form 4 Application for Tax Paid Transfer and Registration of Firearm to the ATF. The form requires identifying information about the firearm and personal information about the applicant. The transferee must submit an identifying photograph along with two completed FBI Forms FD-258 fingerprint cards. This information is compiled in the National Firearms Registration and Transfer Record, colloquially known as the NFA registry. The transferee must also pay a $200 tax.

The NFA procedure is also a prohibitive waiting period. The latest ATF data measured the wait time for completion of a Form 4 at seven months, or over 200 days. At certain points in 2016, waits stretched to about a year.

Chipman’s policy of treating AR-15s “just like machineguns” would also mean a ban on the civilian possession of newly-manufactured AR-15 rifles. In 1986, anti-gun members of Congress were successful in getting one piece of gun control into the vital Firearm Owners’ Protection Act. A late, and controversial, amendment from Rep. William J. Hughes (D-N.J.) placed a ban on the transfer and possession of machineguns manufactured after May 19, 1986. Treating AR-15s like machineguns would mean a permanent freeze on the total stock of AR-15s Americans could lawfully possess.

There are good reasons gun control advocates seek to obscure such radical goals.

An October Gallup poll showed that 57 percent of Americans oppose “a law which would make it illegal to manufacture, sell or possess semi-automatic guns, known as assault rifles.” For the last seven years, every time Gallup has asked this question opposition to a ban has outweighed support.

Moreover, there is no evidence that further restricting commonly-owned semi-automatics would reduce violent crime. A pair of Department of Justice-funded studies of the 1994 Clinton semi-automatic ban could not determine that the ban reduced violent crime. The later of the two studies, from 2004, stated, “the ban’s impact on gun violence is likely to be small at best, and perhaps too small for reliable measurement.” In explaining why, the researchers wrote, “estimates consistently show that AWs [commonly-owned semi-automatic firearms] are used in a small fraction of gun crimes.” More recent research from the RAND Corporation determined, “Evidence for the effect of assault weapon bans on total homicides and firearm homicides is inconclusive.”

History also shows that otherwise law-abiding gun owners are unlikely to comply with gun registration requirements. In the year and a half following implementation of the N.Y. SAFE Act in early 2014, 23,847 people registered 44,485 guns. Estimates of the number of firearms in the state subject to registration were 1-1.2 million. Gun control advocates didn’t have any better luck that year in Connecticut. Despite estimates that Nutmeg State residents owned several hundred thousand firearms and 2.4 million magazines subject to new registration requirements, owners registered a mere 50,016 firearms and 38,290 magazines.

Anti-gun advocates are well aware that the American people, through their elected representatives, have repeatedly rejected the severe gun control measures they support. Faced with this reality, gun control advocates have continually dressed up their fanatical goals in all manner of disguise. Constantly masquerading as moderate, for gun control supporters every day is like Halloween. As for anyone who falls for their ruse, it’s all tricks and no treats.