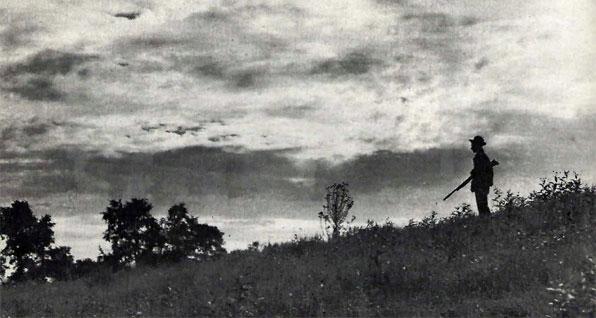 A local reader gave me a number of copies of the old Ohio Conservation Bulletin a few years ago. At that time I glanced through them but laid them aside. Recently, I got them out for a closer look.

I found fascinating information about the history of the Ohio Department of Natural Resources (ODNR), the conservationists, writers and issues from sixty-years ago.

The ODNR headquarters was 1500 Dublin Road, Columbus, which is now the Wildlife District 1 office. Ohio's Governor was C. William O'Neil. Herbert D. Eagon was the ODNR Director with Hayden W. Olds as the Chief of the Division of Wildlife.

The November 1957 bulletin also offers some interesting history regarding the Second Amendment and gun control efforts at that time.

The first title to catch my attention was "A Question of Freedom." The author isn't listed. It focuses on four regulations proposed by the Internal Revenue Service and Alcohol and Tobacco Tax Unit. Click here to see a scan of this article.

They were holding a hearing to give individuals, organizations and states the opportunity to present their views. William Saxbe was the Ohio Attorney General, and Ohio was represented at the hearings by Assistant Attorney General William M. Vance. Among the groups to testify were the National Association of Sporting Goods Dealers and The National Association of Police Chiefs.

The four rules being considered were:

1. Each manufacturer and importer of firearms, identify such by stamping thereon the name and location of the manufacturer or importer and the serial number, caliber and model of the firearm. Most of this information is now being stamped on the weapons by the principal manufacturers for their own purposes and in their own interests.

2. Each licensed manufacturer or dealer maintain records reflecting the receipt and disposition of all firearms. These records would be required to he preserved permanently until the licensee or its successor in interest discontinues business. The present regulations provide for the maintenance of such records but only for six years. The statute itself provides that "Licensed dealers shall maintain such pertinent records of importation, shipment, or other disposal of firearms, and ammunition as the Secretary of the Treasury shall prescribe."

3. Each manufacturer and dealer shall maintain records with respect to the production or receipt and disposition at wholesale or retail of pistol and revolver ammunition, but not .22 caliber rim fire ammunition, shotgun shells or metallic rifle ammunition, including the identity of the persons from whom received and to whom sold. This requirement exists today with respect to manufacturers. It is now proposed to extend the requirement to dealers.

4. Over-the-counter sales of firearms and pistol and revolver ammunition to be acknowledged by the signature of the person to whom the firearm or ammunition is sold, delivered or distributed. At the present time the regulations require every dealer to make a record of the name of the person to whom a firearm is sold. The only additional requirement imposed by this section is the signature of the purchaser on the proposed firearm and ammunition records.

The amended regulations would "… make a million honorable, honest men suspected criminals to make it a questionable bit easier to catch one scoundrel."

"The proposed regulations are unconstitutional: they are an affront by an executive bureau on the functions of the legislative branch of our government; they make every sportsmen a presumptive criminal; and, wrap it all up they are ill-conceived, ill-considered, unworkable and ineffective.

"Sportsmen oppose them because they imply that every owner of a shotgun is a potential gangster".

"These regulations are bureaucracy at its worst."

I think Mr. Vance summed up all the gun control laws since 1957 and all that are still being proposed today!

I could go on with a long list of the common sense in Mr. Vance's testimony. Many of us have used similar words to our elected officials. The times have certainly changed, but many of the same challenges remain.

The old bulletins remind us of where we have been as gun owners and sportsmen. They also point to our ongoing struggle against government intrusion on our freedoms.

Sadly, it would appear that not so many U.S. Representatives and Senators might show up to testify against additional rules. In 1957 all but one opposed the rule changes, certainly not likely to happen in Washington D.C. gun control hearings today!

Oh, and guess who supported the additional rules. No surprise here: the National Association of Police Chiefs. One more thing that hasn't changed in over sixty-years!