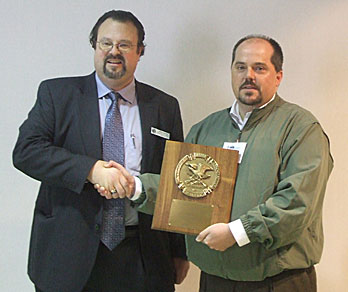 The award, which was given at the NRA's Annual Meetings in Louisville, KY, recognizes Hanson for his extensive pro-bono work to improve and defend gun rights.

He is the author of the “Ohio Guide to Firearm Laws”, and has authored articles published in United States Concealed Carry Association (USCCA) Magazine and SWAT Magazine.

Ken holds a Type 01 FFL, and is a NRA Certified Instructor in multiple disciplines, is certified as a Utah BCI Concealed Carry Instructor, and acts as a legal trainer for other concealed carry instructors.

He is a frequent lecturer for community groups and organizations on gun issues, and frequently acts as a consultant on political campaigns for sportsmen issues.

But the primary reason Ken has earned the NRA-ILA's Defender of Justice Award is donation of countless hours of pro-bono legal work on gun rights causes over the past several years, including over 170 pro-bono hours from January 1, 2008 - March 31, 2008 alone.

2. Josephine Lee v. Sheriff Karnes (Pro-Bono)
Ohio Supreme Court case against County Sheriff who refused to accept an applicant’s sworn statement that she was in fear for her personal safety. Supreme Court ruled the Sheriff must accept the statement on its’ face without further inquiry.

4. D.C. v. Heller (Pro-Bono)
Counsel of record on Amicus brief filed in SCOTUS on behalf of Buckeye Firearms Association and a coalition of 5 private security trade organizations. The brief documented the failure of the city to protect their citizens and argued that the citizens must be allowed to protect themselves.

5. Ohio v. Fearing (Pro-Bono)
Counsel on case of a license holder subjected to a felony stop based upon a “man with a gun” call, license holder was charged with a Felony. All charges dismissed after motion to suppress and dismiss was filed challenging probable cause.

6. Private case (non-charged, identity of client not public record.) (Pro-Bono)
Citizen who was also a licensed armed security guard was held at gunpoint by state public safety agents after walking from his own front door to his own car while carrying a holstered pistol openly. Police agency agreed this arrest was illegal and instituted mandatory refresher training on the right of citizens to carry firearms.

8. Extensive work on behalf of NRA-ILA on pro-bono lobbying work among legislative and executive offices in Ohio, including multiple meetings with legislators, staff attorneys, legislative service commission members and leadership. Drafting and review of most pro-gun legislation in Ohio (Pro-Bono, more than 70 hours in 2008 alone.)

The leaders and supporters of Buckeye Firearms Association (and gun owners everywhere) are forever in the debt of our friend, Ken Hanson, and we congratulate him on this most-deserved recognition.