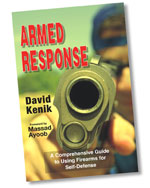 I've been a fan of David Kenik ever since I first read his book, Armed Response. Unlike a lot of "fluffy" books on self-defense, Armed Response is loaded with solid and practical information.

I didn't know David had turned the book into a series of videos until recently. And I was so impressed, I contacted David and asked if we could sell his videos on our website. As an avid gun rights supporter, he said "yes" before I could finish my question. You can order these videos anytime in our Gun Stuff Mall.

Here's an interview I did with David a few days ago.

David, how did you develop an interest in self-defense?

I've been interested in guns for a long time. But I had no formal training, so I struggled to find out what worked and what didn't. It wasn't until I attended my first training program with Massad Ayoob that I realized some of what I'd taught myself wasn't accurate. That class opened the floodgate on my desire to learn more. From there, I attended as many tactical classes as I could.

Over time, I turned that interest in to a profession. Now I have become a contributing editor to several tactical magazines and co-founded the Police Officers Safety Association, which is a national, non-profit organization that offers enhanced training to Law Enforcement Officers. I am also an officer and trainer with a New Mexico police agency.

Your book, Armed Response, is one of the best self-defense books I've ever read. What was your motivation for writing it?

First off, thanks for your compliment. Simply put, I wrote it to save readers from the mistakes that I made for many years. The book is the culmination of my experience - what works and what doesn't. I wrote it in an educational style to guide readers through an understanding of the issues and the options, not simply a dogmatic insistence on my concept of what is "right."

When did you start offering self-defense classes?

My training classes started as a follow-up to my book. I found many people had lots of issues and questions and a more interactive training approach was needed. I started training by developing a single class based on the book. With its popularity, it has expanded to include additional handgun classes as well as rifle and shotgun instruction.

Why is education and training important for those who have a gun in the house or carry a firearm?

The best way of looking at it is that the more you know about personal defense and gun fighting, the more you realize how much there is to know. Defending yourself, with a firearm or without, is a much, much more complicated issue than most people think, both in terms of tactics and legal issues. Hitting a target with your gun is the simplest part.

Emphatically NO! The choice of caliber and gun is way, way down at the bottom of the list of survival priorities. There is a whole chapter in my book dedicated to this subject. In short, the number one priority is awareness. There is no defense against a sneak attack. If you aren't looking, you won't see.

Number two is proper tactics. What you do and how you do it may save your life. Next is your skill with your weapon. Having the largest whizbang bullet won't matter if you can't hit what you are aiming for. The absolute last item on the survival list is caliber. Carry the gun that you best hit your target with, preferably one that has lots of bullets.

I can talk for hours about stopping power. While both sides (9 vs. 45) will never agree, they do agree on one thing: shoot until the threat stops!

Some people think ordinary people can't use a gun responsibly. What do you think?

Your Armed Response video series is excellent. What makes it different from all the other videos out there?

I think the style is quite different. Like my book, we talk about an issue, explain the options, advise what option that we prefer, and give all the information so viewers can make their own determination as to what is right for them.

Everything is practical and realistic and designed for real people who carry. I don't like videos that promise a lot and then don't deliver. So I wanted to pack in all the information I could, with no repetitive "filler." When you buy a 2-hour Armed Response DVD, you get 2 hours of training, not 45 minutes repeated 3 different ways.

Most people think that owning or using a gun is a "guy thing." Is that true?

Not at all. In fact, reports that I hear from many gun retailers is that women buyers are closing in on being in the majority. That's a good thing.

What would you say to people who think carrying a firearm is a little crazy?

To me, not carrying a gun is crazy. People who do not carry have not properly thought through the reality of life. We live in a violent world. It is often suggested that calling 911 is all that is needed. A careful analysis of what that entails and how long a police response takes compared to the time it takes to commit a violent act will quickly prove that to be idiotic.

Your book and videos are already priced fairly, considering the massive amount of training and information you pack into them. But could I convince you to make us a special deal?

Having started my own pro-gun rights group here in Rhode Island a few years ago, I have a soft spot for the cause and everyone in it working for our rights. So, yes, I'd like to make a special offer — two special offers actually. For the organization, I will donate a portion of the proceeds of all sales to Buckeye Firearms Foundation. For supporters, I will offer a $40 discount on a complete set of 5 Armed Response training DVDs.

There's no substitute for actual, in-person training, of course. But these DVDs come pretty close. And if my math is right, it comes to about $13 an hour, which is a crazy good deal for self-defense training.

I agree. Thanks, again.