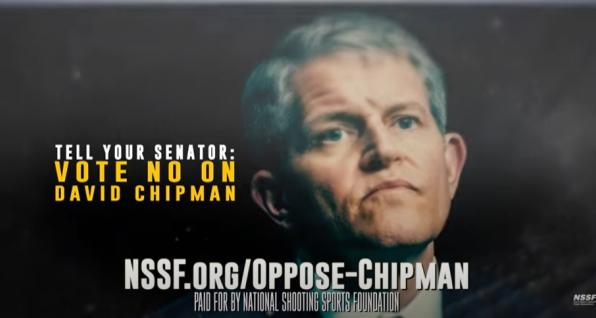 NEWTOWN, Conn. — The National Shooting Sports Foundation® (NSSF®) is making its first-ever television commercial debut in a spot that is urging U.S. senators to oppose President Joe Biden’s nomination of David Chipman for director of the Bureau of Alcohol, Tobacco, Firearms and Explosives (ATF).

The television ad spots will appear in West Virginia and Maine.

“This is monumental for NSSF and it speaks to the importance the firearm industry places on protecting the 342,330 jobs and $63.5 billion economic impact this industry provides,” said Lawrence G. Keane, NSSF Senior Vice President and General Counsel. “David Chipman’s nomination is clearly a move to politicize the ATF. Voters in key states reject his nomination and those senators have been advised of those polls by NSSF. We are now taking our opposition to the public to remind their senators that Chipman’s nomination is a threat to jobs, revenue and not the least – the ability of law-abiding citizens to exercise their God-given Second Amendment rights.”

Chipman is a paid gun control lobbyist who works for Giffords gun control group and has advised antigun billionaire Michael Bloomberg’s gun control group Everytown for Gun Safety. He testified before the U.S. Senate Judiciary Committee that he would ban the most popular-selling semiautomatic centerfire rifle in America – the AR-15 – with over 20 million already in circulation, despite his inability to define it as what he terms an “assault weapon.” Chipman proposed to Congress that the ATF abuse its authority by punishing gun owners with a penalizing mandatory tax, registration, fingerprints and photo submission and notification of chief law enforcement officers. He also told senators that law-abiding gun owners are criminals in waiting and advocated they be arrested for “pre-crimes.”

Chipman’s hostility for gun owners is well-documented. He ridiculed the over 8.4 million first-time gun buyers in 2020, comparing them to “Tiger King” and mocked new gun owners by encouraging them to empty their guns and, “Hide it behind the cans of tuna and beef jerky that you’ve stored in the cabinet and only bring that out if the zombies start to appear.”

Chipman is unqualified and unworthy of a position of law enforcement authority.