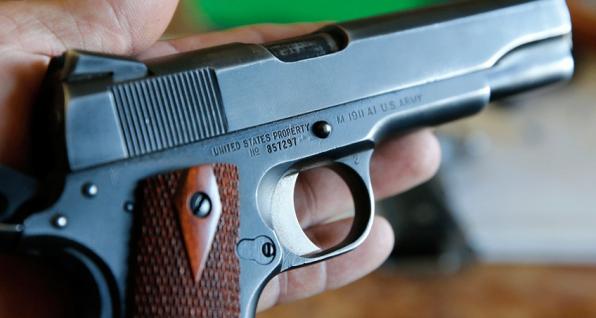 The House of Representatives has approved Congressman Mike D. Rogers' amendment to the National Defense Authorization Act, which—if accepted in the Senate—could make it possible for Americans who meet stringent requirements to purchase a military surplus handgun from the Civilian Marksmanship Program.

As NRA High Power and CMP Service Rifle competitors know, the CMP is authorized under federal law to sell surplus rifles and ammunition to U.S. citizens of age, who belong to shooting clubs affiliated with the program, after passing a background check, and satisfying all federal and state laws. Representative Rogers’ amendment would simply extend the authorization to include other firearms. For example, allowing the Army to provide the program with 100,000 M1911 .45 caliber pistols. This would benefit the Army, the CMP and taxpayers alike.

Of course, there’s a hitch, because if there’s one thing that gun control supporters dislike more than semi-automatic rifles like the M-1s the CMP sells, it's handguns!

On Monday, the Huffington Post approvingly reported that the Obama administration opposes Representative Rogers’ amendment, claiming that the CMP would sell the .45s over the “Internet” or by “mail-order,” without background checks. But the Obama administration isn’t telling the truth. Federal law requires the CMP to conduct background checks and to comply with federal and state laws governing firearm sales.

The administration is apparently also claiming that .45s sold by the CMP would be “untraceable.” But this, too, is false. All military firearms have serial numbers, and the CMP keeps records on every firearm it sells.

Finally, Team Obama also says that if Congress wanted the CMP to sell handguns, it should have said so in 1996, when it established the program in its current configuration. But this is Obama’s most frivolous objection of all. As he knows, but doesn’t care, Article I of the Constitution vests all legislative powers in the hands of Congress and Congress alone. That means if Congress now wants the CMP to be able to sell handguns, like it did decades ago, when the program was known as the DCM, Congress has the power to say so.

One final irony is that if any handgun would pass muster with the White House and likeminded anti-gunners, seemingly the M1911 would be it. After all, it was issued with a single-stack, seven-round magazine, a capacity even New York was willing to tolerate with the original version of the execrable SAFE Act. This just demonstrates what we’ve said all along, which is that despite their insistence to the contrary, these folks just don’t like guns or the fact that guns are commercially available under any circumstances.

Like Congress, we too have power. The grassroots power to call or email our U.S. senators, to ask them to support the inclusion of the Rogers amendment in the National Defense Authorization Act. The power to experience the satisfaction of owning a piece of history, when those .45s become available. The power to encourage the Army to transfer the handguns according to Congress’s intent. And the power, on Election Day 2016, to make sure the next president is someone with whom endless arguments related to gun ownership and the limits the Constitution places upon presidential power will not be necessary.