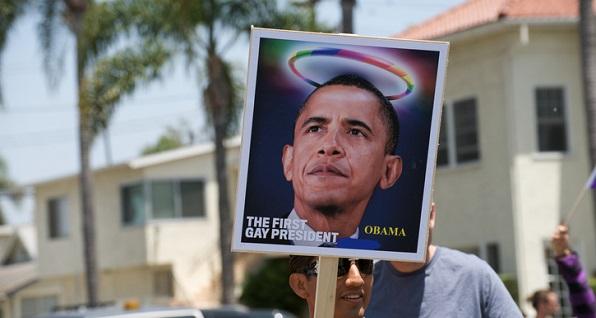 Barack Obama is still upset about just how bitterly so many Americans cling to their guns. During an interview with Oprah Winfrey that aired [late last year], the former president expressed his anger with the fact that gun owners successfully organized to defeat his radical gun control agenda in early 2013.

When asked by Winfrey about high-profile shootings, Obama responded,

I have to say, Oprah, gun violence is one of those issues that I think we are far away from the promised land on because it’s become such a cultural hot button issue. It’s become wrapped up with people’s sense of identity and the degree to which the country is divided.

Addressing the December 2012 high-profile shooting in Newtown, Conn. and the political aftermath, the former president went on to add,

But, I will say that was the not only maybe the saddest day of my presidency, but when Congress failed to do anything in the aftermath of Sandy Hook was probably the angriest I ever was during my presidency. I was disgusted and appalled by the inaction… it was all viewed as politics…

Obama’s response was in line with his previous statements on the topic. In a July 2015 interview with the BBC, Obama noted that gun control was “one area where I feel that I've been most frustrated and most stymied.”

For her part, Winfrey was in visible agreement with Obama as he responded to her question. Winfrey has been associated with gun control activism since the 1990s when the talk show host supported radical anti-gun group CeaseFire, Inc. Part of the group’s mission statement was to “educate Americans to view handguns as the inherently unsafe and dangerous products they are, and not appropriate to have in any home.” Winfrey also promoted the anti-gun Million Mom March and has expressed her support for a ban on commonly-owned semi-automatic firearms.

Obama’s chief complaint to Winfrey was that gun owners had the temerity to politically organize to defend their Second Amendment rights in opposition to his administration’s efforts. Moreover, in doing so, the former president attempted to portray the wisdom of his preferred gun control policies as so self-evident as to be beyond the scope of politics. To the former president, the rights and concerns of the firearms community deserve no political consideration.

Of course, there was no wisdom to Obama’s preferred gun control policy – the criminalization of private firearm transfers (sometimes referred to as “universal background checks”). Following the shooting in Newtown, Conn., the Department of Justice surveyed the efficacy of several gun control measures. In a memo dated January 4, 2013, a DOJ researcher concluded that the criminalization of private transfers would be ineffective absent further draconian gun control measures, including firearm registration.

Obama’s own DOJ told the administration that the gun control legislation he was championing would not be effective. Yet, the president persisted in pushing the ineffective policy until the legislation was defeated in the Senate on April 17, 2013. A reasonable person could conclude that Obama’s decision to promote legislation that would have harmed gun owners while serving no public safety benefit was pure politics.

With his grumbling about the organized gun owners’ political power, Obama is part of a growing list of powerful politicians who have lamented Americans’ attachment to their Constitutional rights.

Recalling the election in his autobiography “My Life,” Clinton explained,

On November 8, we got the living daylights beat out of us, losing eight Senate races and fifty-four House seats, the largest defeat for our party since 1946....The NRA had a great night. They beat both Speaker Tom Foley and Jack Brooks, two of the ablest members of Congress, who had warned me this would happen. Foley was the first Speaker to be defeated in more than a century. Jack Brooks had supported the NRA for years and had led the fight against the assault weapons ban in the House, but as chairman of the Judiciary Committee he had voted for the overall crime bill even after the ban was put into it. The NRA was an unforgiving master: one strike and you`re out. The gun lobby claimed to have defeated nineteen of the twenty-four members on its hit list. They did at least that much damage....

Later in the book, Clinton credited NRA with helping to defeat Al Gore in 2000.

In a similar vein, failed presidential candidate Hillary Clinton repeatedly groaned about gun owners’ political power in her book about the 2016 presidential election “What Happened.” In addition to acknowledging gun owners’ role in the 1994 midterm elections and Gore’s defeat, Hillary complained,

As for the NRA, it kept its promise to do everything it could to stop me. All told, the gun lobby spent more than $30 million supporting Trump, more money than any other outside group and more than double what it spent to support Mitt Romney in 2012. About two-thirds of that money paid for more than ten thousand negative ads attacking me in battleground states.

With gun owners facing a possible Joe Biden-Kamala Harris presidential administration, gun rights supporters should take motivation from Obama’s statements. Obama’s continued whining on guns is recognition of the effectiveness of well-informed, well-organized, and politically-active gun rights supporters. Armed with the same dedication and effort that led to the victory over Obama in 2013, gun owners will be ready to confront the potential challenges of 2021.