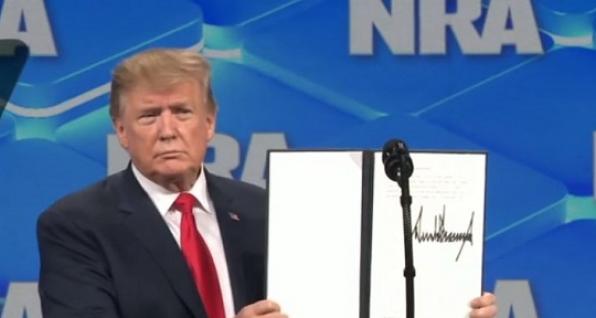 During his speech to the 2019 NRA-ILA Leadership Forum, President Trump announced that he would “unsign” the United Nations Arms Trade Treaty (ATT) effectively withdrawing the United States from the treaty.

Officially signed onto by the United States in 2013 by former Secretary of State John Kerry, the ATT represented the most dangerous step yet taken by international gun ban advocates. By announcing that he will officially withdraw the United States from the treaty, President Trump made clear that he would not abdicate control over the rights of law-abiding gun owners to foreign bureaucrats. He then signed, in front of all in attendance, a formal letter to the Senate requesting that it halt the ratification process and return the treaty to the Oval Office, where President Trump would “dispose” of it.

It’s hard to overstate the importance of President Trump’s actions to protect gun owners from international gun control. As NRA-ILA Executive Director Chris W. Cox put it, ​“today in front of 15,000 NRA members, President Trump once again demonstrated his commitment to our Second Amendment freedoms and American Sovereignty. His commitment to un-sign the anti-gun United Nations Arms Trade Treaty that was forced on us by John Kerry and Barrack Obama, gives NRA members one more reason to enthusiastically support his presidency. Donald Trump isn’t afraid to stand on the side of freedom and defend our God-given right to self-defense and we couldn’t be prouder to stand with him.”

While never ratified by the United States Senate, even unsigned treaties can be dangerous when they attempt to bind the United States to refrain from any act that would defeat the “object and purpose” of the treaty. This type of vague policy statement is typical of the many intentionally unclear provisions of the ATT that we have repeatedly warned could be used by future administrations or foreign bureaucrats to restrict the rights of law-abiding American gun owners.

In fact, the ATT was drafted with the express purpose of allowing future foreign officials to be able to amend the treaty without the agreement of the United States. By requiring only 3/4 of the treaty signatories to create an amendment to the treaty, the future danger of the treaty to American gun owners was effectively limitless.

Please join us in thanking President Trump for putting the constitutional rights of American gun owners ahead of the interests of foreign gun control advocates.