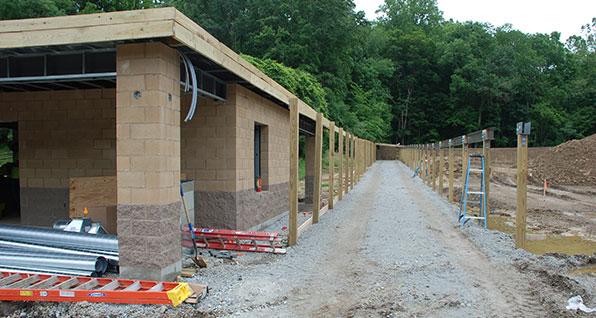 NOTE: Buckeye Firearms Association leaders serve on the Division of Wildlife Range Committee and have played a key role in the Sportsmen's Alliance "Protect What's Right" campaign to get dollars into the Ohio budget for range upgrades around Ohio. There is still much work to do, but we are pleased to be part of this vital work for Ohio's millions of gun owners.

The Spring Valley Wildlife Area range, which is the most used of the ODNR Division of Wildlife ranges, closed last October for major construction renovations.

Extensive upgrades in the project include: a new entrance to eliminate the steep winding driveway; new backstops; new overhead covers; new shooting benches; a shorter pistol range for concealed carry tactical shooting including a ten-foot wall to permit separate cease fires. Plans also included a new berm to be added so that shorter 25-yard or 100-yard distances may be fired from several of the same shooting positions.

The 25, 50 and 100 yard firing lines will be separated to provide individual cease fire situations. A major upgrade is the new range master building complete with restroom facilities, plus expanded security features are also included.

The original plans called for a re-opening target date in the fall of 2019 for Phase I of the project. Phase II will be the construction of a new educational building, however the base infrastructure work was included in the initial plans, so no major digging or dirt moving will be required later. The Division anticipates bidding Phase II following completion of the Phase I with a projected completion by the fall of 2020. An exact schedule will not be developed until a contractor is selected following the bidding process.

A recent visit to the range proved that the contractor has really been working hard to maintain the schedule despite the weather conditions. I was accompanied by a Division of Wildlife Spring Valley employee to both answer any questions and ensure that I stayed safely out of harm's way on the construction site. There was certainly a lot of supplies on site and equipment moving even on another rainy afternoon.

The new entrance, located closer to Roxanna-New Burlington Road, is much nicer. When paved, it will provide easy access to the ranges. The old entrance will continue to be used for the trap range but there will be a gate to close the road, eliminating the old narrow steep hill. Minor changes are being made to trap range. The firing line is moved to be at an angle so shots will be better directed towards the woods. The hill has been graded to provide better drainage away from the firing line.

Just to the south of the new entrance road, the area for the new archery range is graded. This will provide easy access with ample parking. The current archery walking woods course remains in the same location.

Entering the firearms range, the first thing I noticed is the hill up to the ranges is eliminated. Everything is now on one grade for easier access and better viewing. The new range master building for shooter check-in is much larger and well situated so Division personnel can view the firing line. One side of the building has a covered area for shooters to relax. Some of the most welcomed additions here are the new restrooms and drinking fountains. The addition of restrooms and potable water will greatly enhance the shooters comfort.

The firing line is in the same approximate location. The ranges are level and grading accomplished to eliminate the previously troublesome wet areas. It is quickly apparent that the new backstops are much higher. The backstops will include the concrete bullet traps utilizing ballistic rubber. The firing line will be covered and the paved area much wider to allow for easier removal of fired brass cases. The new shooting benches are completed and ready to be installed. Shooters will appreciate the level area and the steps taken to eliminate the drainage issues and wet areas.

Brett Beatty, Division of Wildlife District 5 Wildlife Management Supervisor, reports, "The contractor has managed to stay on schedule. The project planning included some allowances for bad weather. It has been a challenge. We were hoping for a late August 2019 re-opening although that has now slipped to mid-September. The new date is still within the planned time frame to have the range fully operational before the fall hunting seasons.

"There have been some minor unanticipated issues, but so far the contractor has been able to work through everything. Everyone is focused on the completion of Phase I. The contractor deserves a huge thank you for all their efforts to get this major project completed on schedule."

It seems a little amazing that, given the wet weather in southwestern Ohio, the contractor has managed to move so much dirt and maintain the overall schedule. Having seen the plans and the ranges, I understand why the Division is so excited about the modernization efforts. Shooters should be excited when the range opens to have this state-of-the-art facility.

Please do not try to visit the range, as it is a closed construction site. The re-opening date will be here before very long.