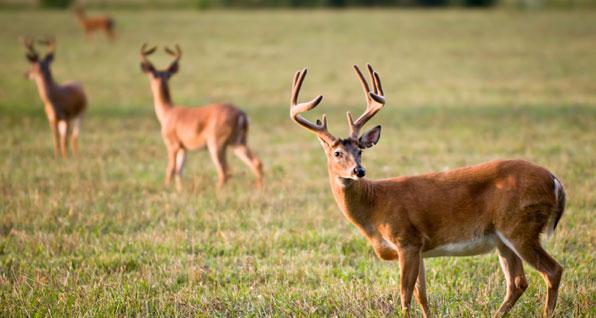 COLUMBUS, OH – The Ohio Wildlife Council approved new white-tailed deer hunting regulations at its meeting on Wednesday, April 9, according to the Ohio Department of Natural Resources (ODNR). Among new regulations are decreased deer bag limits in many counties, and hunters may use straight-walled cartridge rifles during the 2014 deer-gun week. The council also voted to remove bobcats from Ohio’s list of threatened species.

The Ohio Wildlife Council voted to approve deer hunting proposals prepared by ODNR Division of Wildlife biologists. The 2014-2015 deer hunting season dates will remain largely consistent with previous years. One change in season dates included adjusting deer-muzzleloader season to begin on Friday, Jan. 2, 2015, and end on Monday, Jan. 5, compared to last year when the season began on a Saturday and concluded on a Tuesday. The October antlerless deer-muzzleloader weekend will be held for the second year.

The Ohio Wildlife Council also approved changes to Ohio’s list of endangered and threatened species. The bobcat, previously threatened, was removed from the list. Bobcats are still considered a protected species in Ohio with no hunting or trapping season. The snowshoe hare was changed to a species of concern, Bewick’s wren was changed to extirpated and smooth greensnakes were changed to endangered.

Small-game hunting and furbearer trapping season dates were also passed on Wednesday. Season dates and bag limits for migratory birds, including mourning dove, Canada goose, rail, moorhen, snipe, woodcock and waterfowl will be set in August in compliance with the U.S. Fish and Wildlife Service’s framework. The Ohio 2014-2015 hunting and trapping season dates can be found at www.bit.ly/1415Ohiohuntingseason.

Deer bag limits reflect the reduction in the deer population in many counties as numbers continue to move closer to target levels. Bag limits were reduced in 44 counties, increased in five counties and 39 counties stayed the same as last season. Antlerless tags are eliminated in some counties as deer populations approach target levels. Antlerless tags were introduced as a way to reduce Ohio’s deer herd, and have been successful, thereby eliminating their need in certain counties.

The council also approved straight-walled cartridge rifles for deer hunting. The rifles are the same caliber and use the same straight-walled cartridges that are currently legal for use in handguns. The new regulation is designed to allow additional opportunities for hunters that own these guns or want to hunt with these guns. These rifles have reduced recoil compared to larger shotguns, and the rifles are more accurate than the same caliber handgun.

The Ohio Wildlife Council is an eight-member board that approves all of the ODNR Division of Wildlife proposed rules and regulations. Small-game hunting and trapping seasons were proposed at the Ohio Wildlife Council’s January meeting. Deer proposals were presented in February and amended in March. Go to www.wildohio.com for more information about hunting in Ohio.

Council meetings are open to the public. Individuals who want to provide comments on a topic that is currently being considered by council are asked to preregister at least two days prior to the meeting by calling 614-265-6304. All comments are required to be three minutes or less.

ODNR ensures a balance between wise use and protection of our natural resources for the benefit of all. Visit the ODNR website at www.ohiodnr.gov.

The Ohio Division of Wildlife proposal was driven by the Buckeye Firearms Association, which wanted to provide additional gun-hunting opportunities for sportsmen. BFA officials had pointed out the rifles firing straight-walled cartridges have less recoil, are lighter in weight for both youth and older hunters and are more accurate than pistols firing the same cartridges.