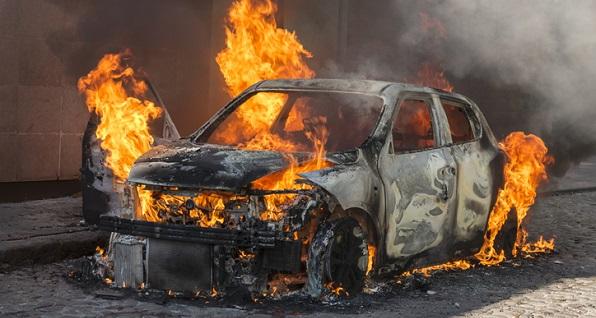 Surviving Mob Attacks on Your Vehicle

Watching some violent “protests” got me thinking about individual tactics for escaping riots and demonstrations.

One scenario I saw playing out over and over again was when a mass of protesters blocked a road or highway. Those “protesters” would occasionally attack people in the cars that were stopped on the roadway. Others used the opportunity to carjack the victims and steal their cars. In one such carjacking attempt, an elderly man was dragged from his car by carjackers and beaten with his own oxygen tank.

Clearly, we need to take a look at the options available when our cars are surrounded by criminal attackers.

As I started writing the article, a new entry from Active Self Protection popped up in my RSS feed. John over at ASP apparently had the same idea and provided an excellent video critique and learning points in his video “Using Your Car To Escape a Mob“. John covered most of the issues that I had planned to write about, so I’ll make a suggestion that you watch his video analysis before we continue. He brings up some very good points.

1) Avoidance is key. Many protests and riots are either predictable or planned in advance. Stay away from the riots if you want to avoid being victimized. When you see masses of people blocking the roadways, STOP. Don’t go any farther. Do whatever necessary to change directions and get out of the area.

If you are alert, you should be able to see these masses of people far enough in advance that you can act before being surrounded. It goes without saying that if you are texting, talking on the phone, or watching a DVD while driving, you may not be paying enough attention to save yourself. Don’t get distracted by electronic devices when driving.

2) You can’t just run people over if they are in the road. The safest thing to do in a situation like this is to keep moving, bumping people out of the way with your car. Unfortunately, that usually isn’t legal. It’s considered vehicular assault. Even if people are illegally blocking the road, you will likely go to jail if you run them down absent a legitimate threat to your life. See why awareness is so important? Getting away from the kill zone both keeps you safe and out of jail.

3) The situation changes, however, once the rioters attack you or your vehicle. With your vehicle surrounded in a manner that you can’t escape and your attackers trying to burn your car, flip it over, or drag you out, it is reasonable to assume that you will suffer serious injury or death. That’s when you can start striking people with your car.

Don’t get out and shoot. You will quickly be overwhelmed and your gun will be taken from you. Instead, accelerate steadily and forcefully, driving away from the surrounding rioters. Steady movement is the key. Hitting folks too hard can disable your vehicle. As John suggests, use your vehicle to push people out of the way rather than striking them.

4) Doors locked and seat belt OFF. It should go without saying that your doors should be locked when driving. If your doors don’t automatically lock, get in the habit of locking them manually as soon as you get inside. You don’t want the crowd to be able to easily open your door and drag you out.

You may not have enough time to do it, but cracking your windows and turning off your ventilation system would also be a good idea when driving in areas where crowds may gather. Windows that are down approximately 1/2″ are actually harder to break than windows that are tightly closed. You want to turn off the ventilation system so you don’t get overcome by any smoke or tear gas that is in the air where you are driving.

Your seat belt should be off. Seat belts will reduce your ability to draw a firearm. They will also prohibit you from making a speedy escape should your vehicle be set on fire or overturned. In general, it’s safer to stay inside the car in a crowd. If Molotov cocktails hit your car, drive quickly away. The wind will likely extinguish the burning liquid before you are hurt. If the car is disabled, and under fire attack, get out. It’s best to take your chances on foot than be trapped inside and burned alive.

5) Tear gas grenades may or may not work. Many people have asked me about the utility of carrying a couple of pepper spray grenades in the car with you for the purpose of keeping large gangs away from your vehicle. I carry some in my car, but I would be hesitant to recommend the tactic. In order to deploy the grenades, you’ll have to get out of the car or lower the windows. Both of those actions dramatically increase your risk. The crowd may be wearing gas masks or the like as well. I think the grenades would work better if you were on foot than they would if you are attacked in a vehicle.

6) Carry your gun on your person, not in the car. Some folks like using holsters that mount under the dash or on the steering column for just this type of criminal act. I think it’s a bad idea. If you have to bail out of the car quickly, you may not have a chance to grab the gun. Do you want to abandon a firearm and leave it in the hands of the rioters? I would hope not. Carry your gun on your person. Don’t leave it in your console, glove compartment or special “counter carjacker” holster on the steering wheel.

7) Beware of other forms of roadblocks. The roadblocks designed to make you stop, may not take the form of people. The rioters will steal cars and then purposely abandon them in the middle of roadways. It causes you to stop and also prevents police/fire vehicles from getting to the scene. It’s a common occurrence around the world. Even more notorious are homemade caltrops. A bunch of those strewn across the roadway would cause all kinds of havoc.

Take a look at the tactics used by rioters and protesters around the world. Commit to avoiding areas where such protests are occurring. If you do get caught up in the mob violence, consider some of the tips above to make it out safely.