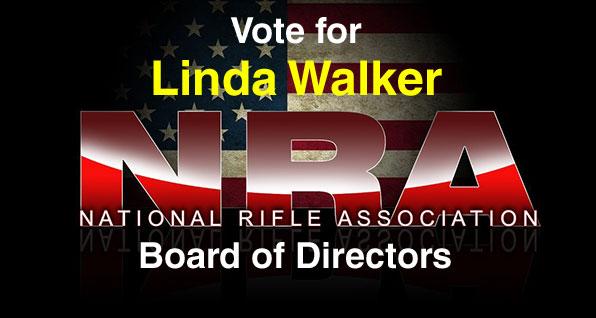 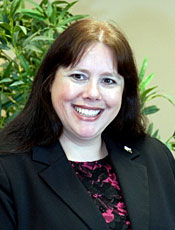 My name is Linda Walker and I am asking for your vote for re-election to the NRA Board of Directors.

I am an NRA Benefactor member, nominated by the nominating committee and also by petition of the members. I wasn’t required to run petitions, but it’s just the right thing to do!

Having been to previous Board meetings prior to running, a saw that there were very few women serving as Board members. We are the fastest growing segment of the shooting society, and I wanted to represent those ladies and their families.

When Ohio passed concealed carry, I was one of the first to get my concealed handgun license. I learned very quickly 3 years prior when I became a Realtor, that I was in a very dangerous occupation. I wanted to be able to protect myself.

I GOT INVOLVED!!!! Boy did I get involved!

I wasn’t looking for a cause, most certainly not the gun rights cause, but the cause found me. Shortly after getting my CHL, I was invited to leadership of Buckeye Firearms Association. I was ignorant of what I was getting myself in to. But 2 months later, I was in the Ohio Statehouse testifying for legislation we were running.

Throughout my years with Buckeye Firearms Association, I have worked up to serving as Vice President on the BFA Board of Directors. I have successfully lobbied with our legislative team to make huge strides in restoring Second Amendment rights to Ohioans. We have successfully passed many bills including Preemption, Castle Doctrine, Restaurant Carry, a lot of clean up legislation, and most recently the employer parking lot ban which prevents employers from punishing employees for keeping lawfully-owned firearms inside their vehicle. In 2016, I assisted the Ohio Bureau of Vehicles to bring back the NRA Foundation license plate.

Furthering myself in the cause, I became an NRA Certified Instructor in multiple disciplines and instructed thousands of students in concealed carry classes. I became an NRA Election Volunteer, Friends of NRA Chairman, NRA Recruiter, regular contributor to NRA News, multimedia spokesman, Gun Rights Policy Conference speaker, and speaker at other speaking engagements.

In 2009, the NRA awardrf me the “Sybil Ludington Women’s Freedom Award.” This is the highest award on the national level given to a women for furthering the shooting sports through legislation, education and advocacy. This award is what led me to run for the NRA Board of Directors.

When I was elected, I advocated to NRA to do something for the ladies attending Annual Meetings. The 1st Annual Women’s New Energy Breakfast was born through this, as I will be co-hosting our 4th Annual New Energy Breakfast again with fellow Board members Sandy Froman and Maria Heil. Our target audience being the lady who was attending her first Annual Meetings and really didn’t know what NRA was all about. This has been a very well received event.

I was re-elected to the Board in 2014. I have sat on multiple NRA Committees including Legislative Policy, State and Local Policy, Women’s Policy and Grassroots Development.

I am honored to be chosen to be part of President Trump’s 62-member Second Amendment Coalition with fellow 2A advocates. We will be tasked with helping the president further the Second Amendment and keeping the Supreme Court pro-Constitution.

I am neither rich nor a famous celebrity. I don’t get paid for what I do. I am just an average person who has devoted herself to the Constitution, the Second Amendment, and upholding it as our Forefathers meant it to be. My husband Jim and I raised our three sons to be fine Patriots, with two of them serving in the US Army and one as a law enforcement officer. The cause has been a great sacrifice to our family, but I do it for my grandchildren. I had the privilege of growing up with freedoms that I want them to enjoy, and that is why I do all this.

I ask that when you receive your ballot, you check the box next to my name, Linda Walker. It is my humble honor to represent the NRA’s five million members and continuing the fight for our rights!

I am honored to be endorsed by Buckeye Firearms Association, and Soldier of Fortune Magazine.