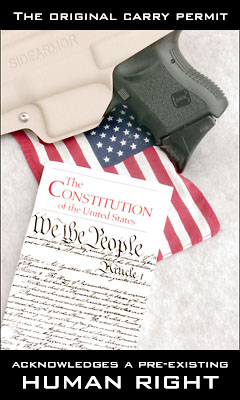 “Self-defense is a fundamental right that must be respected,” said Chris W. Cox, executive director, NRA-ILA. “Law-abiding West Virginians are now free to choose the method of self-defense that best suits their needs. The NRA and our five million members are pleased that the legislature voted in support of West Virginians’ Second Amendment freedoms.”

Current law allows for permitless open carry, but makes it a crime for a person to carry a concealed firearm without a permit. Once enacted, law-abiding West Virginians will be able to carry their firearm in the manner they choose. HB 4145 also strengthens penalties for anyone caught carrying illegally and recognizes the Second Amendment rights of individuals between the ages of 18 and 21. Under current law, law-abiding adults aged 18-21 are prohibited from carrying concealed in West Virginia. The enactment of HB 4145 will allow these law-abiding adults to obtain a concealed carry permit.

HB 4145 passed the House of Delegates and the Senate with significant bipartisan support. On Thursday, Tomblin vetoed the bill. It then returned to the legislature, which overrode his veto. After the veto, Patrick Morrisey, the West Virginia Attorney General, expressed his support for the bill: “It’s time to override the Governor’s veto of the constitutional carry gun bill. As the chief legal officer of the state and the person in charge of criminal matters for the state at the WV Supreme Court and in federal courts, I know that this legislation will not impact public safety. If this bill is enacted, we will not only expand freedom, but we will keep our citizens protected.”