They haven't come right out and said it, but judging by two election eve mailers, anti-gun Attorney General candidate Mike DeWine and his cousin Kevin, who chairs the Ohio Republican Party, hope and believe gun owners are idiots.

Conspicuously absent from almost all DeWine for Attorney General general election campaigning to date is any mention of firearm/hunting/sporting rights. There is a simple explanation for this: DeWine's record on firearm rights is beyond horrible.

He stands alone as the only Republican Senator ever to be endorsed by the Brady Campaign (formerly Handgun Control Inc.), because his record "really wowed the group." He was named among the Top 10 anti-gun U.S. Senators by Human Events, which noted that he was "consistently the only Republican to speak in favor of anti-2nd Amendment legislation on the Senate floor."

But don't take it just from us. Consider the words of Dave Yost, the ORP's endorsed candidate for Treasurer of State:

"No one would expect you to sit through a waiting period or get a government permit in order to join a church. After all, the right of every American to freedom of religion is clearly stated in the First Amendment. Yet to many lawmakers - including Mike DeWine - those very same restrictions on your 2nd Amendment rights are just fine."

Mike DeWine's anti-gun history does not deserve any further examination, it is far too well established in the public record to merit any other discussion. (see links below for review)

On the other hand, EVERY SINGLE OFFICIAL ACT Richard Cordray has ever taken has been consistent with a vibrant support of your Second Amendment rights. 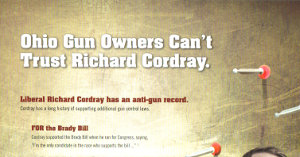 But apparently the DeWines and the ORP can't be trusted to tell the truth. Consider page 3 of a campaign mailer attacking Cordray as a "fake":

The flyer also provides a couple of Cordray quotes from the 1990's, saying, among other things, that he once supported the Brady Bill.

At least Richard Cordray has had several years in office to prove via his actions that he has changed his opinion. All Mike DeWine and John Kasich have are words.

During his time as state treasurer, Cordray had jurisdiction over disposing of "surplus" state lands. During this time, he worked hand in hand with sportsmen to make sure that all state hunting lands were protected.

His time as Attorney General has merely reinforced this commitment to firearm rights. Beyond easy official actions, such as defending all pro-gun laws passed in the past six years, Cordray has aggressively pursued concealed carry reciprocity agreements with other states, having signed agreements with Nebraska and North Dakota.

He has also quietly worked, behind the scenes, to diffuse situations such as open carry on the Statehouse grounds (he told the Capitol Square Commission they could not prohibit gun carry there) and keeping open our shooting ranges (a BCI report concluding that the Big Darby Creek shooting range was safe and should not be closed down was submitted to the court for consideration.)

Cordray has been such an advocate for pro-gun causes that at the same time the ORP's mailers are hitting boxes accusing him of being anti-gun, a newly-minted gun control group funded entirely by New York Mayor Michael Bloomberg is sending out mailers attacking him for supporting Ohio's concealed carry reciprocity agreement with Florida and for opposing efforts to ban private transactions at gun shows (while praising Mike DeWine for his support of same!)

How extraordinary - at least this Astro Turf gun control group is telling the truth about Cordray and DeWine. The same cannot be said of the Ohio Republican Party! 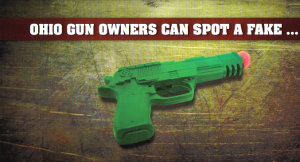 As page 4 of the ORP's "fake" mailer says, "Ohio Gun Owners Can Spot a Fake."

Yes, we most certainly can. And his name is DeWine.

Ladies and gentleman, despite the feces the Ohio Republican Party is trying to shovel, whether you consider yourself a hunter, shooter or sportsman, Richard Cordray has earned your support.

What has Mike DeWine done for you?

Buckeye Firearms Association has created a fact sheet to counter Mike DeWine's lies, and we need your help to circulate it far and wide. Don't assume everyone knows his record - do your part to make certain they do.

Mike DeWine IS a proven enemy of the Second Amendment:

Mike DeWine wants to be Ohio's Attorney General. But is that what YOU want?

Op-Ed: No Vote for DeWine

Senator DeWine proud to be anti-gun

NRA: DeWine and Voinovich ''out of touch'' with Ohioans