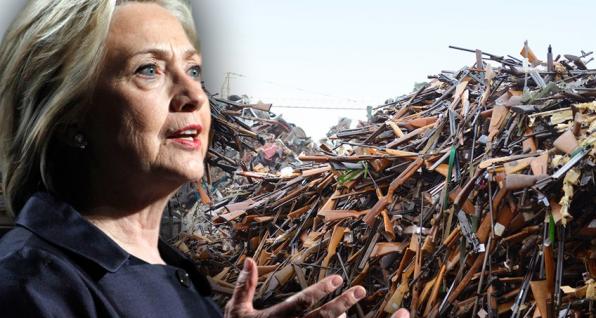 It’s another to make it the centerpiece of a floundering presidential primary campaign.

But Hillary Clinton wasn’t finished when she latched onto the idea of opposing the NRA as a means of diverting the nation from the humiliating scandals and poll results plaguing her own bid to succeed Barack Obama.

First, she announced to her wealthy supporters that “the Supreme Court is wrong on the Second Amendment,” which demonstrates her opposition to the individual right to keep and bear firearms, including handguns, for self-defense.

[Recently,] at a town hall meeting in Keene, New Hampshire, Clinton was questioned by an audience member who noted that Australia “managed to … take away … millions of handguns, and in one year, they were all gone.” He then asked her, “Can we do that?”

She immediately responded that not just Australia but also the U.K. is “a good example” of a country responding to a “mass killing.”

“The Australian example,” she said, “that was a buyback program.” She went on to explain that the Australian government “offered a good price” for “buying hundreds of thousands of guns, and then they basically clamped down going forward … .” They were thus able, she explained, “to curtail the supply” of guns and “to set a different standard for gun purchases in the future.”

Here in America, she went on, “I think it would be worth considering doing it on the national level if that could be arranged.” She compared the Australian and U.K. regimes to local gun “buybacks” and to Obama’s own “cash for clunkers” program, in which Americans were offered tax credits for trading older, gas-guzzling vehicles for newer, fuel-efficient models. “So I think that’s worth considering,” Clinton said. “I don’t know enough details to tell you … how we would do it or how it would work, but certainly the Australian example is worth looking at.”

The more details you know about Australia and Great Britain, however, the more extreme Hillary’s views become.

The misnamed “buybacks” of Australia and Great Britain were nothing like the failed “cash for clunkers” program, which simply sought to update the cars Americans drove, not to ban them. They weren’t even comparable to local gun buybacks, which attempt to incentivize the voluntary surrender of guns that their owners are free in most cases to replace as they see fit.

No, the Australian and U.K. “buybacks” were merely an attempt to mollify firearm owners whose property had been declared contraband and subject to seizure. They were, to paraphrase Vito Corleone, an offer gun owners could not refuse. The owners had the “choice” to accept the money and turn the guns they had previously been forced to register (supposedly so they could keep them under grandfather provisions), or they could risk the government forcibly confiscating the guns and being sent to prison for possessing them (supposing, of course, that they survived the confiscation attempt itself).

If you own a gun now, take heed. President Obama and now Hillary Clinton finally made clear what they’re really after – national gun confiscation.

To hear Hillary’s remarks for yourself, see the video at this link: http://freebeacon.com/issues/clinton-australian-style-gun-control-worth-....

The stakes in 2016 could not be higher when it comes to our fundamental freedom and the future of our nation.