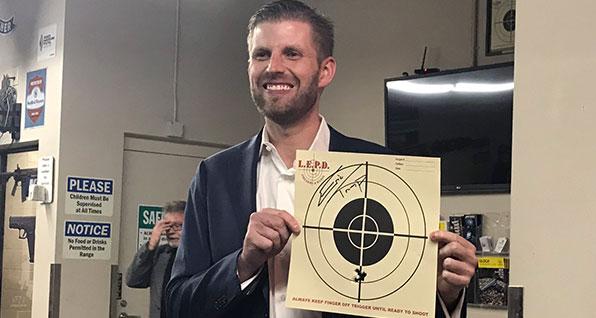 After brief introductions, Eric Trump provide an overview of his Second Amendment, shooting sports and hunting experiences. He explained, "This is a real commitment for my family. I started shooting at age five. I grew up hunting with my Grandfather in New York state. This is our lifestyle - a way of life."

(For more on Eric Trump see my interview with him from 2016.)

He summed up the critical achievements of the Trump Administration noting, "The Trump Administration has appointed 189 federal judges and 52 federal appellate court judges. This means that 29% of the current appellate court judges are Trump appointees. These are younger conservative judges who may serve for thirty-plus years. There will be two, and possibly three, more Supreme Court judges appointed in the next four years."

The discussion was a true roundtable with participants providing questions and feedback. Trump was at ease with the group and readily engaged on each topic. It was a significant list of today's important Second Amendment issues including:

Trump provided feedback on each topic. He concluded, "It all comes down to trusting society. We are not the people causing the problems. We cannot put the government in charge of morality. Our family may be attacked more than probably anyone. Red flag laws scare the hell out of me. We must fight like hell for the Second Amendment!"

Trump, along with the LEPD owners, left for some quick range time. The group, led by Paduchik, Brasseaux and Henson, discussed strategies for a victory in November. There is no magic wand for victory. It is hard work requiring every gun owner to be engaged.

Getting the vote out is always the key factor. That effort begins with voter registration. Every gun owner should work to register new voters who will support the Second Amendment. We can ensure they get to the polls or, better yet, vote early and get their vote "in the bank."

Paduchik cautioned, "We hear stories of people signing up through some voter registration effort but when they show up at the polls they are not registered. If anyone signs up through a group, make sure you know that group. Some groups do not follow through and submit the paperwork. Others may actually cull voters who don't agree with their organization."

The bottom line is gun-owners and sportsmen must own the 2020 election. Quite simply the future of the country we love and our way of life is on the line!