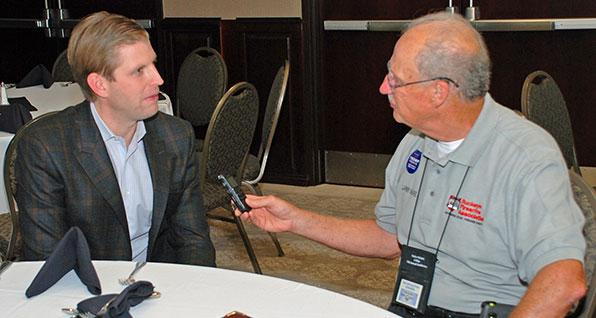 The Trump family has been in the media for many years and, of course, much more so since Donald Trump entered the Presidential race. Perhaps you've seen his sons, Donald Jr. and Eric, on several outdoor and shooting sports shows.

When the opportunity to interview Eric Trump presented itself during a visit to the Ohio Gun Collector's Association (OGCA) show and the Sportsmen's Alliance Rally, I jumped at the chance to get a first-hand look into his participation in shooting sports, hunting and, especially, his views on the Second Amendment.

There are clear differences between the Trump Campaign and that of Hillary Clinton. None is a more stark contrast than their vision of the Second Amendment.

BFA: How did you become involved in hunting and the shooting sports?

Eric Trump: A very important mentor in the outdoors was my Grandfather. He actually came to the US. We would travel to communist Czechoslovakia where he would give us a BB gun and we would spend a day in the woods. He was also a great fisherman. He loved the outdoors and got us into it. It is something we've carried our entire lives. We loved it through high school and college. If we are not working we are hunting, shooting or fishing. It is a great American tradition and a large part of my life.

Quite frankly so many of my peers were drinking at an early age. They partied all night and went down a lot of bad roads. We were waking up at 5AM to get into a deer stand. The shooting sports actually kept me away from those bad influences. I can directly attribute the shooting sports and outdoors for keeping me on a very clean path in life. I think that is the case for a lot of young people.

BFA: Do you have a favorite type of hunting?

Eric Trump: It is so hard to pick one. I love deer hunting in November during the rut. I live in the woods and a tree stand with my bow. I also enjoy waterfowl hunting. I spend time in New Mexico elk hunting and just returned from a caribou trip in Canada. I also do a lot of turkey hunting. It's very hard to pick a favorite but the deer and waterfowl hunting are special.

BFA: What type of shooting sports do you participate in?

Eric Trump: I shoot about a pallet of shotgun shells each year. I like a lot of trap, skeet and sporting clays. I shoot some pistol leagues and enjoy steel challenges. I've done some long range shooting and small bore also. I enjoy the three disciplines and the sub-disciplines of shooting. I also reload for a variety of calibers. My wife enjoys the shooting sports with me. She is a really good shooter. She loves shooting shotguns and pistols. My sister, Ivanka, also joins us shooting. We believe in the shooting sports as a hobby and great American heritage.

BFA: You had an important mentor in your life. Are you mentoring new shooters and hunters?

Eric Trump: Mentoring new people is everything. Getting women and young people into the shooting sports is so important. My brother has five kids. He will bring them out to the woods for deer hunting. It is the most rewarding thing. I'm at a point in life where if I can take one of them out, I don't care about pulling the trigger. I love to share that with others. We love to get the kids out hunting, shooting or fishing. We have some good marksmen coming on in the family. I've never met a female that doesn't love the sport once you introduce them to it. It's just so important to introduce new people to the sport.

BFA: What does the Second Amendment mean to you and your family?

Eric Trump: Dad loves the Second Amendment and believes in it. We want the good guys in the country to have guns. Bad people will always have guns. Good guys with guns are not the problem. This is common sense. We believe in concealed carry and that a person has a right to protect themselves and their home. Look at every country where guns have been taken away and what has happened. That's the reason there is a Second Amendment. It was put right after free speech for a reason by the founders. It is smart for our country.

BFA: Lets discuss the role of hunting and conservation in the United States.

Eric Trump: Land conservation is important. Hunters are the greatest conservationists. Hunters and shooters contribute more money every year to conservation than any other source. Hunters do more for wildlife than anyone else. No one can contest that fact. They have a greater love and appreciation for the outdoors. They spend their time and money funding conservation. This is a critical thing for us today.

Look at Teddy Roosevelt who was a great hunter. He hunted all over the world. He also created our national park system from Yellowstone and forward. So many of the public lands we now have are a direct result of everything he did for the outdoors. These are some of the most beautiful lands in the world that are preserved because of his work. There is a direct relationship between a hunter, who loves being outdoors and has respect for the land, and the person who wants to protect that for future generations of Americans to enjoy. That speaks to our values.

One of the great issues that faces hunters today is land access. The government is attempting to take back access to our public lands. This depletes the land we can hunt unless you own a big farm. The next generation has fewer places and less opportunity to hunt. They will not have that opportunity the same way as our grandparents passed it down to us. Management of our public lands is a massive issue. If we win the campaign, we will make this a priority.

BFA: A critical point for any President is the appointment of judges. How important is this to the future of our country?

Eric Trump: Anybody who doesn't think this is the most important election in recent history is really underestimating the impact of the next President. The next President will put three or four people on the Supreme Court of the United States. If Hillary has the opportunity to do that, our Second Amendment is done. The traditions and heritage of the outdoors, the shooting sports and hunting are done. There is one seat to be filled immediately. It is clear that President Trump will appoint a very pro-Second Amendment and pro-sportsman Justice while Hillary will do the exact opposite. If there is anything worth voting on in this election, it is who will put in the Supreme Court Justices. We are one Justice away from losing the values we cherish. Everyone understanding this and getting out to vote is so critical.

Eric Trump, who is obviously experienced with the media spotlight, was clearly at ease with the questions and conversation. He brought an energy to the interview. His spoke with passion, conviction and without hesitation as a man who understands the issues and his position. He did not ask to see the questions prior to the interview. This was not a political stump speech but a young man speaking from the heart about hunting, shooting, fishing and, most importantly, the Second Amendment.

He clearly enjoyed his visit at the OGCA show. Many of the members who saw and spoke with him at the show commented on his knowledge of firearms. They noted that he is knowledgeable and quite comfortable discussing guns. In my opinion, he shares the same values and passion for the firearms and the Second Amendment as the members of the OGCA, supporters of Buckeye Firearms Association and pro-gun advocates.

Outdoor writer and hunter education instructor Larry S. Moore is a long-time volunteer leader for Buckeye Firearms Foundation and winner of the 2005 USSA Patriot Award, the 2007 League of Ohio Sportsmen/Ohio Wildlife Federation Hunter Educator of the Year, the 2010 National Wild Turkey Federation/ Women in the Outdoors Hunter Education Instructor of the Year and the 2014 Ohio NWTF Outdoor Writer of the Year.