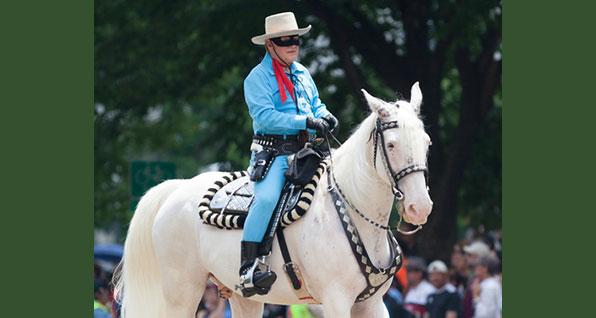 The Lone Ranger No Longer Rides – in California

This humorous piece has been floating around the internet. We're not sure where it comes from, but we thought you might enjoy it.

The Lone Ranger was arrested in Lone Pine, California for the crime of illegally transferring silver bullets. The famed masked man had just apprehended an armed felon after shooting the gun out of his hand. As was his practice for the last eighty years, he gave a silver bullet to the outlaw’s victim.

She was a kindly old widow who was robbed and held captive by the desperado. This lady, grateful that her life and property were restored, treasured the silver bullet as a symbol that justice was done.

The trouble started when she showed the bullet to her weekly garden club. Upon seeing the gleaming memento, one lady fainted. Another lady gasped that they were all going to die. A third lady, who was also a member of CHA (California Hysterics Anonymous), warned that where there was a bullet, there had to be a gun.

During the shocked silence an attendee desperately summoned the Sheriff on her cell phone.

When the Sheriff heard their story he struggled to stifle a laugh. He knew the old gentleman on the big white horse. He also appreciated how many criminals the Lone Ranger had captured over the years. However, since California voters passed Proposition 63, he had to uphold the law.

Predictably, he found the masked man enjoying a beer at the Dry Gulch Saloon back in town.

"Thanks for helping old widow Smith," he said, "but did you really give her a silver bullet?"

"Yes," replied the Lone Ranger, "after all that’s my trademark. Got a problem with that?"

"Well, yes," hesitated the sheriff. "Ya see – under Proposition 63, you’ve got to be a licensed firearms dealer to give anyone a bullet."

"Are you kidding?" asked the Lone Ranger.

"Wish I was," said the embarrassed sheriff, "and to boot whoever receives the bullet has to be registered with the Department of Justice."

"Holy guacamole!" exclaimed the masked man. "Did I do anything else wrong?"

"Well," said the sheriff, looking even more sheepish now, "there’s the little matter of you shooting a gun out of the outlaw’s hand."

"What!" said the Lone Ranger. "If I hadn’t done that, the skunk would have plugged me for sure."

"I know that," admitted the Sheriff, "but he’ll probably sue you for failing to retreat and using unnecessary force. If they convict you, they’ll take your six-shooters away for good. Which reminds me, according to California law, your pistols have too large a capacity. If I were you, I’d convert those six-shooters into five-shooters as quick as you can."

"Hold on," said the Sheriff. "I need to remind you that Indians are now referred to as Native Americans. We privileged male palefaces have got to remember that."

As the Lone Ranger sat in shocked silence, the sheriff explained his rights and proceeded to take him in.

Postscript: Upon being provided an attorney at state expense, the outlaw successfully sued the Lone Ranger. He claimed that he could no longer work since he had suffered the permanent loss of his trigger finger.

Governor Gavin Newsom urged imposing the maximum sentence for possession of illegal ammunition and a firearm that exceeds lawful capacity. He received a huge monetary award, forcing the Lone Ranger to sell the silver mine.

Tonto was deemed innocent, but victimized by virtue of being a member of an oppressed minority. He was given land by the state and now operates a very profitable casino.

After getting out of jail, the Lone Ranger could not find a job since he was now an ex-con. Fortunately, Tonto lets him do light janitorial work at the casino and sleep in the basement.