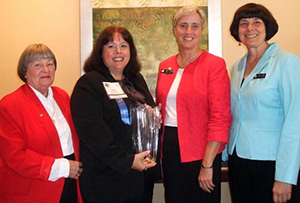 According to the NRA, "the Sybil Ludington Women's Freedom Award recognizes exceptional accomplishments of modern heroines through their legislative activism as well as advocacy, volunteerism, and education of others to the goals of the Second Amendment and the NRA on a national level. Its name comes from a heroine of the American Revolution."

Walker was accompanied to D.C. by her friend and Buckeye Firearms Minuteman Mary Carducci. The pair were given V.I.P. treatment during their weekend stay. Upon arriving on Thursday, they enjoyed a private tour of the Capital Building with the intern of their Congressman, Pat Tiberi, and lunch with Congresswoman Jean Schmidt, a long-time friend of Buckeye Firearms Association.

On Friday the NRA treated them to a tour of the D.C. monuments, as well as a visit to the NRA headquarters and National Firearms Museum in Fairfax, VA. That evening they attended the President's Reception with the current board of directors, executive vice president Wayne LaPierre, NRA-ILA executive director Chris Cox, lead council Chris Conte, and other award recipients. Later that evening Walker appeared as an in-studio guest on NRANews.com's Cam & Company.

On Saturday, Walker and Carducci shared a breakfast table with Texas Gov. Rick Perry, and John and Carol Cushman. John sits on the NRA Board of Directors, and Carol serves on the committee for women's programs that chooses award recipients.

Later that morning, Walker offcially accepted the award, in the form of a stunning crystal vase, from NRA President Ron Schmeits.

"It was such an honor to stand before the executives and the board of the National Rifle Association," Linda remarked.

The Sybil Ludington Women's Freedom Award has been awarded since 1995. Past recipients have included such noteables as Marion P. Hammer, the NRA's first woman president, and Suzanna Gratia Hupp, who became a gun rights advocate and Texas legislator after her parents were murdered by a spree killer inside a "no guns" zone.

The leaders and supporters of Buckeye Firearms Association congratulate Linda on this most-deserved recognition.