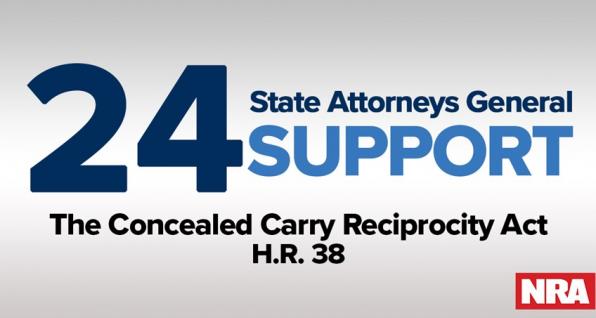 AGs: Will not result in an increased risk of crime

The letter states that H.R. 38 is a much-needed solution to a problem facing gun owners and poses no threat to public safety. “The exercise of Congress’s power is particularly warranted in this case because too many states refuse to allow law-abiding visitors to carry concealed firearms. These states leave people without any real option for self-defense. Allowing concealed carry across state lines will not result in an increased risk of crime, as those states that have reciprocal concealed-carry agreements have not encountered any significant safety issues.”

H.R. 38 would eliminate the confusing patchwork of state laws that make it difficult for law-abiding gun owners to travel across the country with their firearms for personal protection. The Concealed Carry Reciprocity Act affirms that law-abiding citizens who are qualified to carry concealed firearms in one state can carry in other states that allow residents to do so.

© 2017 National Rifle Association of America, Institute for Legislative Action. This may be reproduced. This may not be reproduced for commercial purposes.