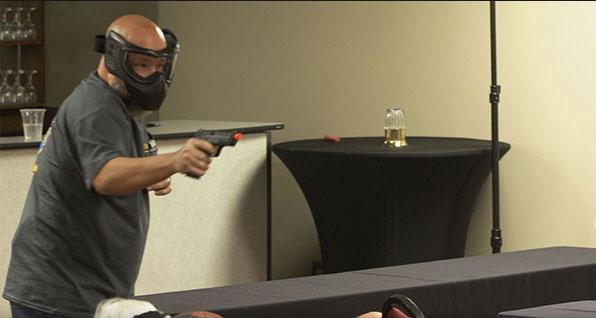 After the mass murder on February 14, 2018, at Marjory Stoneman Douglas High School in Parkland, Florida, where 17 people were killed and 17 others wounded, our Foundation decided to host a town hall titled Experts Town Hall: Effective Response to Active Killer Events.

Read our report on the town hall here.

Earlier in the day, John Benner, founder of Tactical Defense Institute and creator of the FASTER Saves Lives training curriculum, ran a live demonstration of an active killer event for Central Ohio media.

Volunteers helped create a simulated classroom where an armed murderer entered the room and began shooting (with an airsoft gun). In the first part of the demonstration, the people in the classroom were unarmed and unable to effectively respond to the threat. In the second part of the demonstration, at least one person in the room was armed and able to respond immediately and stop the killing.

The message for the media was simple: the key element in mass murder events is TIME. The more time someone has to kill people without being challenged, the more people who die.