2014 Buckeye Bash is one to remember

April is the ten-year anniversary since concealed carry in Ohio went into effect. House Bill 12 was sponsored by State Representative James Aslanides. Sheriff's offices were jammed as lines formed to apply for a Concealed Handgun License (CHL). Opponents screamed that shoot-outs would be on every corner and every traffic light. Of course, those predictions didn't come true. It has been a very successful ten-years with many improvements made to the law.

Buckeye Firearms Foundation (BFF) hosted their annual Bash in Columbus at the Villa Milano Banquet Center. Just as ten-years ago crowds lined up to apply for a CHL, the sold out crowd of 500 filled the banquet center to join the festivities. There were friendships to be renewed, guns to be won and exciting speakers to celebrate an important anniversary.

BFF President Jim Irvine welcomed the guests. He emphasized the progress made in the Ohio concealed carry law but addressed another initiative saying, "We have the FASTER (Faculty/Administrator Safety Training and Emergency Response) program. Our plan was to hold one class and evaluate it. Ohio Gun Collectors Association stepped up and has been tremendously generous supporter. We were able to do another complete class. We now have thirty school districts in Ohio that have personnel trained and are keeping our children safer. Other states are looking at this program. It's incredible what we can accomplish together. I can't understate the importance of joining the groups here tonight in our efforts."

Many elected officials attended the event. Lt. Governor Mary Taylor was there meeting and greeting attendees. Taylor has a long history with concealed carry in Ohio as she voted for the original H.B. 12. She noted, "Our state is a great destination for sportsmen and women. The Governor and I remain committed to protecting sportsmen dollars as well as our strong heritage of hunting, fishing and trapping. Partnerships with Ohio sportsmen groups are important to us. There are 1.56 million sportsmen who spend more than 2.7 billion annually which accounts for over 47,000 Ohio jobs. We are making improvements in the state owned shooting ranges. We are reinvesting shooters dollars. The Buckeye Firearms Association played a critical role to bring the pistol caliber rifle for deer hunting to Ohio. They developed a campaign to educate the ODNR, sportsmen and landowners about the ethics and safety of using these rifles. We thank you for your patience and understanding.

"Ohio resident deer hunters have raised concerns that Ohio is an undervalued destination for trophy white-tailed deer. Ohio's out-of-state fees are significantly low. We have proposed an increase that will put Ohio on a level playing field. ODNR is committed to using these funds on land acquisitions plus hunter recruitment and retention. It's nice to see many of you again and to make new friends. Your continued advocacy for issues is very important to Ohio."

Ken Hanson, BFF Legal Chair, addressed the audience noting, "I welcome you to the safest ballroom in Ohio." Hanson provided a stirring tribute to Otis McDonald, who passed away on April 4, 2014. McDonald was the lead plaintiff in the case against the City of Chicago which resulted in the city ban on concealed carry and firearms being overturned. Hanson said, "I really admire the man. The moment of silence is rather cliché. I would ask that we greet him with the same response as if he were here standing next to me. I ask that we all stand and give our appreciation to Otis McDonald." McDonald received a rousing standing ovation.

Tim Knight, a leader in the Colorado recall movement, recognized volunteers Linda Walker, Ken Hanson and Sean Maloney for their support in Colorado. Knight explained, "I was raised by Buckeye parents who taught me to be sincere in my thoughts and actions. We successfully recalled the President of the Colorado Senate and defeated the agenda of two billionaires while delivering a resounding message to America. Three Buckeyes flew to Colorado on their own accord to do the right thing. I thank Cam Edwards and the NRA News who gave updates and got the word out. We refer to his show as 'Radio Free Colorado.' Please accept my personal thank you for your time and dedication to helping us. You have the admiration of not only Colorado but the nation. The flag of liberty flies higher because of you."

John Hohenwarter, the NRA-ILA lobbyist who works in Ohio, added, "The folks in this room make me look good back in Washington. People like Jim Aslanides and Jon Husted were a huge help in passing good gun legislation. We all get blamed for the criminal misuse of firearms. Fortunately we have been able to get good legislators elected who understand the difference. I love coming to Ohio." 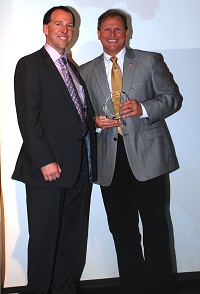 Jim Irvine introduced H.B. 12 primary sponsor Jim Aslanides. Aslanides spoke, "Thanks for giving yourself that applause. It was an honor to help fight the most important and fundamental legislative battle of our lifetime. It was a pleasure to fight the way we had to fight. There are a lot of great friends here I've not seen for a long time. The friends here are really important. As a legislator the information you rely upon has to be honest and accurate. Ken Hanson provided that information to us. When I introduced H.B. 274 (concealed carry bill prior to H.B. 12) only 40% of the public was with us. The opposition was emotionally energized and playing on the worst case scenarios. As an engineer I understand that facts always win the day. We relied on fact and educated the public. We understood much of the public feared guns. We turned the fear around that criminals fear armed citizens. H.B. 12 became the law. It was a flawed law but when it was passed 67% of state supported us. It was because of all the people this room. We don't change things because of a handful of legislators but because of people. The flaws were a good thing because we had to make changes. The improvements with preemption caused the Governor (then Governor Bob Taft) to exercise the veto power on the bill. The veto didn't stop us. We overrode the Governor's veto. It was the first time in thirty-eight years a vote had been overridden. I don't know if there will be another time when we have to fight so hard for another fundamental right. I know the people in this room will be ready. The people we relied upon will be relied upon again."

Irvine thanked Aslanides for his leadership noting, "Then Speaker Jon Husted made the override vote happen by keeping the House in session. Aslanides' Legislative Aide Rebecca Rugg played a huge part in the process. I want to present to Jim Aslanides the first Buckeye Firearms Association Guardian of Freedom Award." 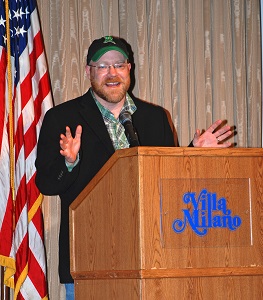 Cam Edwards of the NRA News' "Cam & Co." was the keynote speaker. Linda Walker introduced him as a vital part of the NRA family and key to getting the message out through his radio and now Sportsmen Channel television show.

Edwards spoke, "Thank you very much for the invitation to be here. I am a huge fan of Buckeye Firearms Association and what the people of Ohio have accomplished. Concealed carry went into effect April 8, 2004 and the NRA News signed onto the airwaves on April 15, 2004. One of the first shows we featured was Ohio's right to carry. Someone said there would be shootouts at Blockbuster video stores. Please note that right to carry has expanded and outlasted Blockbuster.

"Ten years later we are still hearing the same tired stories around the country. We inspire each other. We may often feel tired and needing a break. But there is always someone there to say come on, I'll help. Let's get this done. We know if we don't do it that it will not get done. There is no calvary to save us. We are our own calvary. You've done an amazing job in the last ten years in Ohio. It's amazing how far we've come nationally. Ten years ago we didn't have a Heller or McDonald case. The gun control groups were desperate we not win these cases. Now gun control groups are changing their message to common sense gun safety. They know gun control loses.

"We are responsible over the last thirty-years for a revolution in the right to carry and right of self defense. What has been the result? The violent crime rate hasn't been this low since the late 1960's, for one thing. There are more guns being sold, especially over the last several years. It is a dogma of the gun control advocates that more guns equal more crime. It's simply not true."

Edwards concluded, "We believe life is worth protecting. Life is worth living in as an expansive state of human liberty as possible. If you are offended by our unabashed love of this country, its rich and complex story; sorry - but we are not sorry. If you are offended by people exercising their right to keep and bear arms; sorry, not sorry. If you are offended by activism in the defense of civil rights; sorry, not sorry. These rights were not established with us. We are safeguarding them for the next generation. What gun owners in this generation have accomplished is remarkable. I think those who came before us would give you a round of applause. Don't ever forget what we have on our side. We have truth. We have each other. We have the support of the American people. Take advantage of what we have. You are ambassadors for the Second Amendment. Ohio is wonderful. Thank you very much."

Everyone left the banquet with a sense of pride, accomplishment and energy. Irvine concluded, "The Buckeye Bash and celebration of ten-years of concealed carry in Ohio was invigorating. It's hard to believe that ten years have passed. It's gone very quickly. We still have work to do and issues to address. It was exciting to see the turnout tonight and know so many are willing to help us move forward."