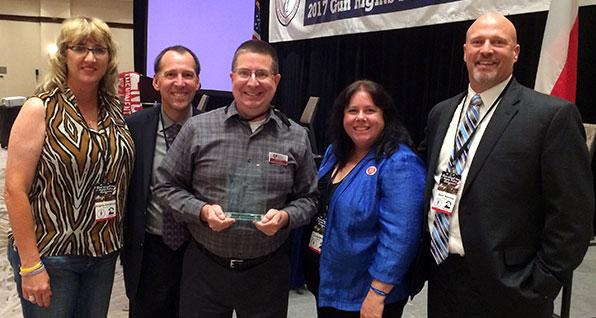 For the third time, the Citizens Committee for the Right to Keep and Bear Arms has honored Buckeye Firearms Association (BFA) with its coveted Grassroots Organization of the Year Award "in recognition of the tireless hard work and dedication to the preservation of the individual right to keep and bear arms by its members.”

Dean Rieck, Executive Director of BFA said, "We have been blessed with a rare group of leaders and supporters who bring a wide variety of skills and experience to the table, allowing us to protect and advance rights on many different fronts. I think this is what makes us unique.”

Over the years, BFA has been directly involved in all of the most significant victories for gun rights advocates in Ohio, including working to bring concealed carry to the state, fix the patchwork of gun laws with statewide preemption of home rule, and establish Castle Doctrine.

BFA also participated in the landmark decisions by the U.S. Supreme Court in D.C. v. Heller and McDonald v. City of Chicago which together confirmed that the Second Amendment is an individual right and applies in all the states.

"We represent 4 million gun owners in Ohio,” Rieck said. "That is an awesome responsibility that we take very seriously. And we never take a break. Day and night, even on weekends, we are carefully monitoring the incessant push from gun control advocates to chip away at our Constitutionally protected rights. And we never stop pushing back to protect those rights and pushing forward to advance those rights.”

"We are deeply honored to once again be recognized for our work,” Rieck said. "But we regard this award to be less about what we have done and more about what we hope to achieve in the years ahead.”

Buckeye Firearms Association (BFA) is a nonprofit organization dedicated to defending and advancing the right of more than 4 million Ohio citizens to own and use firearms for all legal activities, including self-defense, hunting, competition, and recreation.