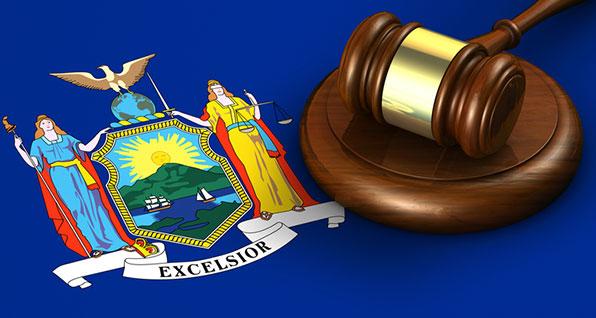 On Friday, August 24, 2018, the American Civil Liberties Union (ACLU) filed a friend of the court brief opposing a motion by the state of New York to dismiss a lawsuit brought by the National Rifle Association (NRA) against Governor Andrew Cuomo.

While it may strike you as odd that the left-leaning ACLU would wade into a lawsuit involving the NRA, it's evidence of just how outrageous the actions of Cuomo and the state of New York really are.

What is the NRA Lawsuit About?

The NRA claims that Cuomo is using government power in an attempt to put it out of business. And that certainly seems to be the case.

As reported by Vox:

The lawsuit dates the New York state government's efforts against the NRA to September 2017, and blames it on pressure from Everytown for Gun Safety, a pro-gun control group financially backed by former New York City Mayor Michael Bloomberg.

In October 2017, the lawsuit notes, New York's Department of Financial Services began investigating the "Carry Guard" line of insurance products, a firearms training program from the NRA that also offers insurance "to cover legal fees and liabilities arising from self-defense shootings." But "the scope of the DFS investigation expanded rapidly" and by late 2017 and early 2018, the NRA says, the DFS was pressuring banks and insurers to stop working with the NRA.

As the Trace's Alex Yablon explains, the dispute became very public in April when Cuomo called on the Department of Financial Services to "urge insurance companies … to review any relationships they may have with the National Rifle Association and other similar organizations" and to "consider whether such ties harm their corporate reputations and jeopardize public safety."

In a display of brazen arrogance, the state of New York has asked for the case to be dismissed without even allowing the NRA a chance for "discovery," which is the legal means by which parties in a case obtain evidence from each other, such as asking questions, requesting documents, and seeking statements from experts. This is a bedrock of common law and how most civil cases are resolved.

On the ACLU's website, Legal Director David Cole explains why the organization has filed their brief defending the NRA's right to proceed with the case.

In the ACLU's view, targeting a nonprofit advocacy group and seeking to deny it financial services because it promotes a lawful activity (the use of guns) violates the First Amendment. Because we believe the governor's actions, as alleged, threaten the First Amendment rights of all advocacy organizations, the ACLU on Friday filed a friend-of-the-court brief supporting the NRA's right to have its day in court.

The state has asked the court to dismiss the case without even permitting discovery into the administration's actions. Our brief supports the NRA's right to discovery on its First Amendment claims. To be clear, the ACLU does not oppose reasonable restrictions on guns (you can read more about that here). Our position in this case has nothing to do with our opinions on the NRA's policies — it's about the First Amendment rights of all organizations to engage in political advocacy without fear that the state will use its regulatory authority to penalize them for doing so.

Political advocacy organizations like the NRA (or the ACLU or Planned Parenthood) need basic business services, like insurance and banking, to operate. The NRA says that the state, using its regulatory powers over those industries, is threatening financial companies that do business with the NRA.

The ACLU's Involvement with Gun Rights

At no time in its nearly century-long battle for civil rights has the ACLU embraced the simple concept of individual gun ownership. Even after the 2008 Supreme Court decision in D.C. v Heller, which clearly affirmed that the Second Amendment refers to an individual right, and despite surveys showing overwhelming public support for this interpretation, the ACLU remains willfully blind on this issue.

The Second Amendment lays out the right to keep and bear arms in 27 words. The ACLU summarizes its position on Amendment II in 35.

Given the reference to "a well regulated Militia" and "the security of a free State," the ACLU has long taken the position that the Second Amendment protects a collective right rather than an individual right.

By their own admission, their position in the NRA case is self-serving. However, to be fair, they are certainly more principled than power-wielding politicians such as Cuomo. And this is not the first time the ACLU has partnered with a gun rights organization.

In 2007, the ACLU joined the Texas State Rifle Association and the Texas Criminal Justice Coalition in a case addressing the right of citizens to carry guns in vehicles and to "spotlight unlawful, unnecessary governmental encroachment on average law-abiding citizens."

In 2013, Chris Calabrese, a top lobbyist for the ACLU, expressed deep concerns in a Daily Caller interview over a Harry Reid bill that called for "universal" background checks.

... those checks have to be conducted in a way that protects privacy and civil liberties.

Calabrese wouldn't characterize the current legislation's record-keeping provision as a "national gun registry" — which the White House has denied pursuing — but he did say that such a registry could be "a second step."

The Beginning of the End?

Clearly, the ACLU is no advocate for gun rights. But at least they can recognize threats to civil liberties, even when they differ on the underlying political issue. Consider their past defense of Rush Limbaugh, the Koch Brothers, the Tea Party, and even extremist groups, such as the KKK and nazis. Their mission has always been based on a purist, no-compromise stance on the Bill of Rights. An optimist could be excused for suggesting that this adamant defender of rights could one day change its tune on the Second Amendment. But don't get your hopes up.

The ACLU of yesterday saw government as the real threat to liberty and maintained a safe distance from partisan politics. Sadly, it is now evolving (or devolving) into a more partisan organization, inserting itself into elections and pouring millions into the campaigns of left-leaning candidates.

In a recent New Yorker article, Ira Glasser, the previous Executive Director of the ACLU, worries that this change could destroy the organization.

"There is no question that this is a transformative change in the way in which and the principles upon which the A.C.L.U. has operated from its beginning, in 1920," Glasser said. "I regard this as a departure which has the capacity to destroy the organization as it has always existed."

The ACLU's move away from principle and toward partisanship may be based on a study commissioned by current Executive Director Anthony Romero. Ironically, the study looked at how the NRA mobilizes grassroots support, and left Romero with the impression that the ACLU could duplicate that success. Unfortunately, I think Romero may be more motivated by money than mission, and risks transforming the once unique organization into just another liberal fundraising machine, pushing the same, well-worn policies as countless other groups.

The real irony, though, is that if the ACLU had embraced the entire Constitution throughout its history, including the 1960's and 1970's when modern gun control started in earnest, the NRA may have remained an organization dedicated primarily to teaching firearm skills and promoting shooting sports. In other words, if the ACLU had defended gun rights with the same intensity as other rights, we may never have needed the NRA as we know it, and the ACLU wouldn't need to risk its very existence in order to mimic the NRA's success.

For now, I'm glad that the ACLU and NRA see eye-to-eye on the Cuomo lawsuit. And optimist that I am, I hope that one day the totally unnecessary tribal partisanship between conservatives and liberals over the Second Amendment will give way to a fully principled approach to all civil rights.

But I'm not holding my breath.