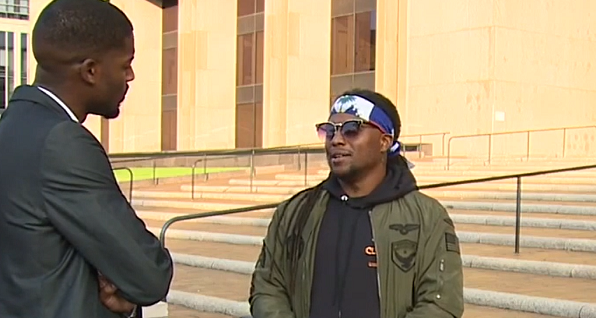 WEWS (ABC Cleveland) is reporting that a man who was arrested at gunpoint while openly carrying two firearms is suing the City of Cleveland in federal court for unlawful arrest.

On May 23, Tolbert was openly carrying his shotgun near East 89 and St. Clair Avenue, something he often does with his organization New Era Cleveland.

News 5 reported many times on New Era armed patrols in Cleveland’s violent neighborhoods, he's always told us the goal is to deter crime.

“Keeping the community safe isn’t just the responsibility of police officers, it’s all of our responsibility, especially those of us that are enduring it when children are being murdered in our neighborhood,” said Tolbert.

Police charged Tolbert with carrying a concealed weapon and a grand jury later dismissed the charges, though video showed Tolbert openly carrying a firearm and at the time the activist says he was legally permitted to carry.

“How does an officer have that type of authority, we have law enforcement officers enforcing law and they don’t know law, that’s a problem,” asked Tolbert.

According to Cleveland.com, New Era Cleveland is a nonprofit organization that focuses on providing resources to communities and conducting safety patrols with trained and armed citizens.

Tolbert has in the past spoken to Cleveland police recruits about how to have proper interactions with residents.

Body cam video show that when officers originally made contact with Tolbert, they acknowledged the state’s law that allows people to carry guns openly, and said that he was not under arrest.

Tolbert walked away before Henderson arrived. The sergeant told officers Tolbert couldn’t walk down the street with a gun.

Officers again drove up and surrounded Tolbert. Henderson got out of his cruiser with his gun drawn and pointed at Tolbert. He ordered Tolbert to put his guns on the ground, according to the lawsuit and body camera footage of the incident.

Tolbert asked why he was being detained and told Henderson he wasn’t breaking any laws.

Henderson, according to the lawsuit and the body camera video of the incident, said “You can’t walk down the street with a gun in your hand…I’m not going to allow you to do it.”

The officers arrested Tolbert, who spent 36 hours in jail before he was released without formal charges.

After his case was filed, Tolbert told reporters his rights were violated and he believes every officer involved in his arrest should be fired.

This is far from the first time officers have either been ignorant of the law, but as a judge in traffic court once told me, ignorance of the law is no excuse. Nor is drumming up false charges simply because they don't like the law.

The right to open carry in the State of Ohio is a constitutional right that's been in place basically since the constitution's been there, and officers have a duty to know and follow the law.