Ohio Attorney General Mike DeWine (R) has released the Concealed Handgun License (CHL) statistics for the fourth quarter of 2015 and the annual report. 2015 saw another increase in demand. It replaced 2014 as the second busiest year (behind 2013) in the history of the concealed carry program, ending with a record 491,000 Ohioans licensed to discretely carry firearms. 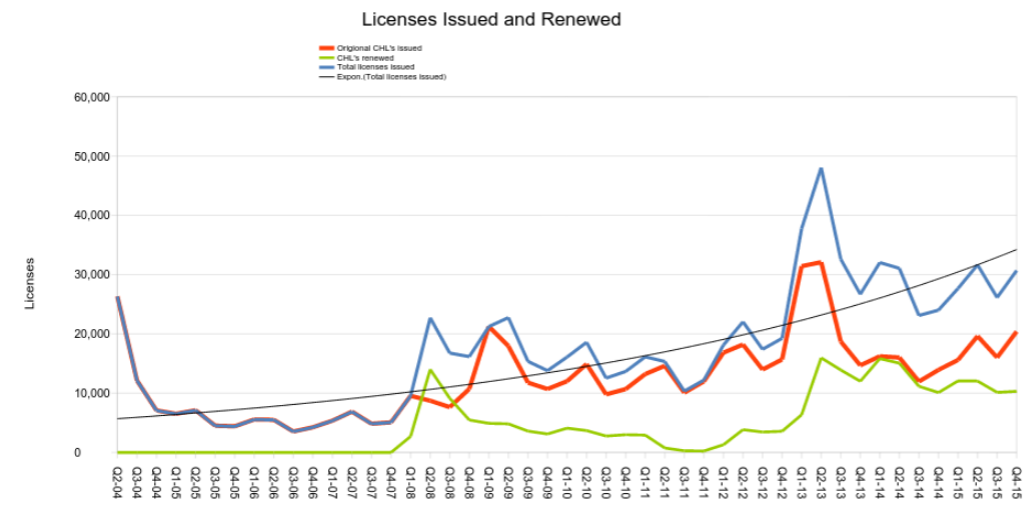 Demand for CHLs finished the year strong, with demand increasing over the prior quarter. Demand surged 47% compared to the same period in 2014. Fourth quarter demand even exceeded the second quarter total. This has happened only one other time in Ohio’s history. That indicates that 2016 is likely off to a strong start, a trend echoed by instructors conducting full classes. Renewals remained consistent with 76% of expiring licenses renewed. The average renewal rate is approximately 73%.

It is always difficult to assign specific reasons for behavior. Certainly the terrorist attacks in Paris, France and San Bernadino, California contributed in people’s interest in being prepared and able to take care of themselves and their families. Events closer to home such as the school shooting at Madison High school will help drive demand in the current quarter and beyond.

Governor Kasich has singed multiple pieces of legislation improving Ohio’s concealed carry laws, but several more critical issues (victim zones and personal property in employee parking lots) still need to be addressed. As we have seen many times, when the law is improved, the demand for training and licenses increases. HB234 took effect in March of 2015 and is likely responsible for some increase in demand. Though the bill reduced training from 12 to 8 hours, many instructors still regularly conduct 12 hour courses.

2015 is the third year in a row that Ohio Sheriff’s issued over 100,000 licenses (initial and renewal) in the year. Each of these years exceeded the yearly total for the first three years combined. As has been noted before, this appears to be a new normal for CHL demand, supporting a theory expressed by Professor Brian Anse Patrick that demand has not leveled off, but is increasing over time.

There were 15 Temporary Emergency Licenses (TELs) to carry a concealed handgun issued in the quarter, up two compared to the third quarter. TELs are only valid for 90 days and cannot be renewed. TELs are issued to persons who need to carry a firearm for protection, but don't have time to obtain the required training. Applicants must apply with their sheriff, pay a fee and pass a background check. The 90 days allows them time to obtain training and apply for a regular license. After issuance, a person must wait four years before they qualify for another TEL.

Even with the record number of CHLs, there were only 68 licenses revoked during the quarter, below the average of the past several years and smallest quarterly total during last year. Less than one half of one percent of all CHLs have ever been revoked for any reason, including death or moving out of state. The establishment media love to make a big deal about the exceptional cases where a CHL breaks the law, but say almost nothing about the more than 99% of law-abiding license holders, many of whom have used their gun to protect life. About one in four revocations were because the training to obtain the license was deficient. Prospective CHL students are reminded that the application contains an affidavit where the student swears that he/she has received the appropriate training. Signing a false affidavit can subject persons to felony prosecutions and a permanent loss of firearms rights. 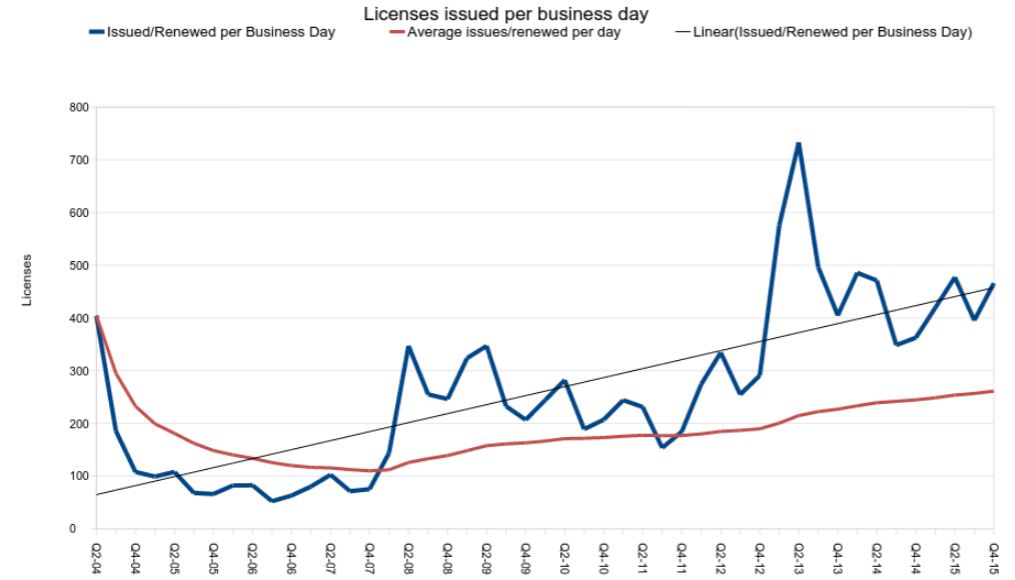 During the fourth quarter last year almost 14 people per hour, or over 460 per work-day, received a new or renewed CHL from an Ohio sheriff. The popular program is a good facilitator of communication between sheriffs and citizens. Take time to get to know your sheriff/deputy while obtaining/renewing your CHL. Law enforcement is generally very supportive of citizens' rights to carry firearms for self-defense.

We encourage you to talk with your sheriff about their support for our continued efforts to update Ohio's concealed carry laws to make them friendlier to citizens. Explain which current gun bills you support and get their thoughts on the bills. We welcome your feedback. Law enforcement and armed citizens are on the same side opposing criminals. In recent years we seem to be returning to a time when we can work together for the rights of the "good guys.

License-holders, like gun owners in general, are not extremists as the anti-gun rights crowd claims. They are honorable citizens who want the means of protection from real dangers. They understand that police cannot, and are not obligated to protect individual citizens from rape or murder any more than they can prevent someone from running a red light. Responsible people wear a seat belt to protect themselves in a car accident. They also carry a gun to protect themselves from a criminal attack. 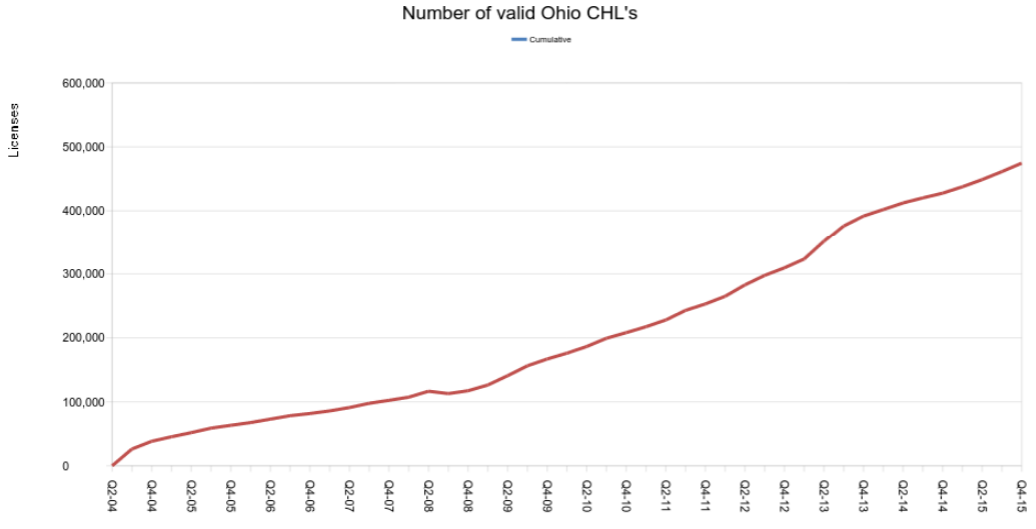 With almost 500,000 Ohio citizens licensed to discretely carry handguns, anytime you are in a group of 18 adults, odds are there is at least one licensee present. If you are with an older or more affluent group, the odds are even greater. Any school with 20 employees probably has one person with a CHL who could be authorized to carry a firearm in that school for the protection of the children. In short, there are few public locations you can travel in Ohio where there will not be a license-holder nearby. Unfortunately, because of the many places license-holders are still prohibited from carrying their guns, the license does not necessarily translate into having someone ready and armed to stop an attack. Victim zones remain a problem in Ohio law.

Every time legislation is passed improving the law, anti-self-defense pundits predict mayhem and problems that will result without tight restrictions on gun owners. Last session it was HB 234 and the reduced training requirement, and they will surely attack good bills being introduced this session. They have been wrong every time, but some newspapers and anti-gun politicians keep repeating their nonsense.

Other media outlets have done a good job with factual reports on firearms and gun owners. A record number of Ohioans are carrying guns in more places, yet we have not seen any dramatic increase in violent crime. This is yet another indication that more guns in the hands of good citizens do not cause any increase in crime, and is likely to deter criminals. It is time to fully “de-Taft” our CHL laws and bring Ohio in line with the majority of states. While no large group of people is perfect, the CHL-holder has proven to be considerably more law-abiding than the population at large.

April 8, 2016 will mark twelve years since Ohio's concealed carry law took effect. It is clear that the law is working well and is popular with responsible, law-abiding adults who care about safety.