Ohio Attorney General Mike DeWine (R) has released the Concealed Handgun License (CHL) statistics for the fourth quarter of 2016 and the annual report. 2016 was another record year with more licenses being issued than any year in the nearly 13 years Ohio has issued licenses.

2016 established new records for 117,951 new licenses issued, 158,937 total licenses issued (includes renewals) and over 594,000 total outstanding licenses. Concealed carry has clearly moved from something “gun people” do to something “safety-minded people” do. 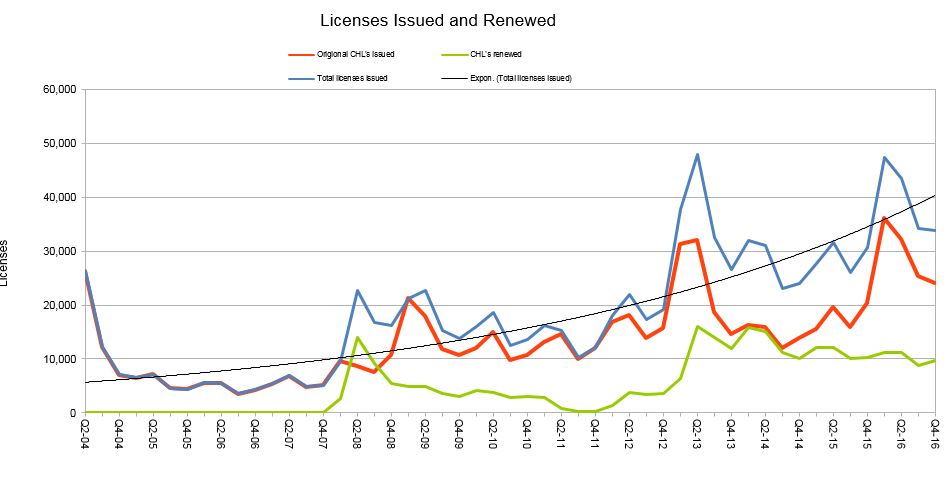 For the person without a CHL, what this means is that anytime they look around and see 14 other people, odds are that one of them has a CHL. Concealed carry is mainstream, common sense and is close to most people on a daily basis. It works so well that most people are blissfully unaware that anyone else is carrying a gun. Most people with a CHL have no desire to intimidate anyone; they quietly go about their life just like anyone else, except they have the tools and training to defend life when the threat of death or grave bodily harm arises.

Many have argued that fear of Hillary Clinton winning the presidency drove demand for gun ownership and concealed carry. While that is certainly a significant piece, it was not the only factor. For approximately two-thirds of the fourth quarter, we all knew Donald Trump had been elected President of the United States, yet demand for CHLs grew 18% compared to the prior year. This is the seventh consecutive quarter that demand has increased over the prior year.

It is always difficult to assign specific reasons for behavior.

Governor Kasich has singed multiple pieces of legislation improving Ohio’s concealed carry laws. As we have seen many times, when the law is improved, the demand for training and licenses increases.

2016 is the fourth year in a row that Ohio Sheriff’s issued over 100,000 licenses (initial and renewal) in the year. They issued more licenses last year than they did in the first four and one-half years combined! As has been noted before, this appears to be a new normal for CHL demand, supporting a theory expressed by the late Professor Brian Anse Patrick that demand has not leveled off, but is increasing over time.

Even with the record number of CHLs, there were only 100 licenses revoked during the quarter, which is the lowest quarterly total for the year. Less than one half of one percent of all CHLs have ever been revoked for any reason, including death or moving out of state. The establishment media love to make a big deal about the exceptional cases where a CHL breaks the law, but say almost nothing about the more than 99% of law-abiding license holders, many of whom have used their gun to protect life.

During the fourth quarter last year over 15 people per hour, or over 541 per work-day, received a new or renewed CHL from an Ohio sheriff. The popular program is a good facilitator of communication between sheriffs and citizens. Take time to get to know your sheriff/deputy while obtaining/renewing your CHL. Law enforcement is generally very supportive of citizens' rights to carry firearms for self-defense. 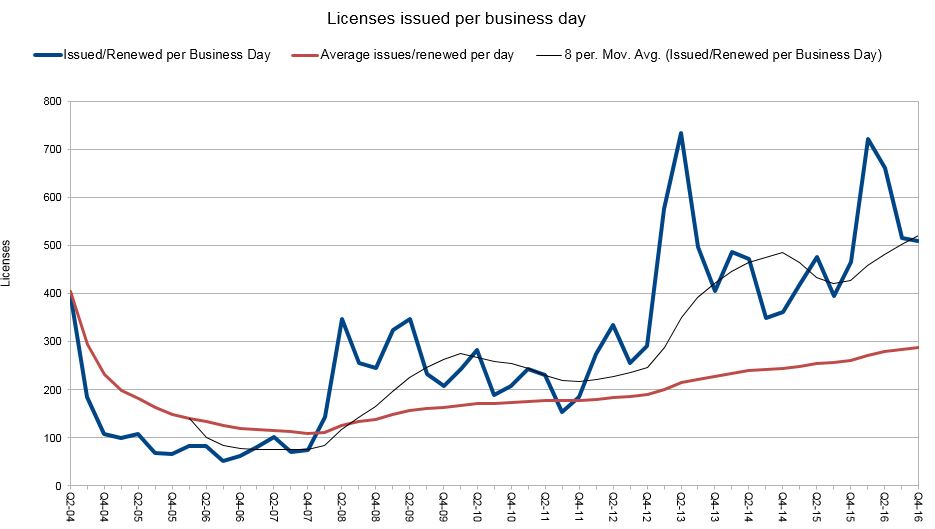 We encourage you to talk with your sheriff about their support for our continued efforts to update Ohio's concealed carry laws to make them friendlier to citizens. Explain which issues you support and get their thoughts as well. We welcome your feedback. Law enforcement and armed citizens are on the same side opposing criminals. In recent years we seem to be returning to a time when we can work together for the rights of the "good guys."

License-holders, like gun owners in general, are not extremists as the anti-gun rights crowd claims. They are honorable citizens who want the means of protection from real dangers. They understand that police cannot, and are not obligated to protect individual citizens from rape or murder any more than they can prevent someone from running a red light. Responsible people wear a seat belt to protect themselves in a car accident. They also carry a gun to protect themselves from a criminal attack.

Every time legislation is passed improving the law, anti-self-defense pundits predict mayhem and problems that will result without tight restrictions on gun owners. They have been wrong every time, but some newspapers and anti-gun politicians keep repeating their nonsense. Thankfully most people understand the truth and ignore the radicals opposed to legal self-defense. That enabled us to make improvements to Ohio law last session that will become effective on March 21, 2017.

Many media outlets have done a good job with factual reports on firearms and gun owners. A record number of Ohioans are carrying guns in more places, yet we have not seen any dramatic increase in violent crime. This is yet another indication that more guns in the hands of good citizens do not cause any increase in crime, and is likely to deter criminals. It is time to fully “de- Taft” our CHL laws and bring Ohio in line with the majority of states. While no large group of people is perfect, the CHL-holder has proven to be considerably more law-abiding than the population at large.

April 8, 2017 will mark thirteen years since Ohio's concealed carry law took effect. It is clear that the law is working well and is popular with responsible, law-abiding adults who care about safety.

Jim Irvine, president of Buckeye Firearms Association, said the uptick reflects a trend of more people viewing guns as a means to protect themselves.

Irvine said a third quarter bump in permits could be attributed to worries Democrat Hillary Clinton would win the presidential election. But he noted permits were also up year-over-year in the fourth quarter when Donald Trump was set to be president for two of those three months.

Irvine said removing some of the restrictions on concealed handgun permit holders has encouraged more people to carry. Gov. John Kasich signed a bill in December expanding where permit holders can carry handguns and prohibiting employers from banning permit-holding employees for locking guns in cars parked on company property.

"The demand is not being driven by gun people -- we all got our licenses a while ago," Irvine said. "It's being driven by people who have never fired a gun before in their life."

Buckeye Firearms Association Chairman Jim Irvine said the perception that only "gun people" are getting concealed-carry licenses is changing.

At the same time, he said, continuing interest since the Nov. 8 election of President Donald Trump disproves the view that people would stop applying for permits.