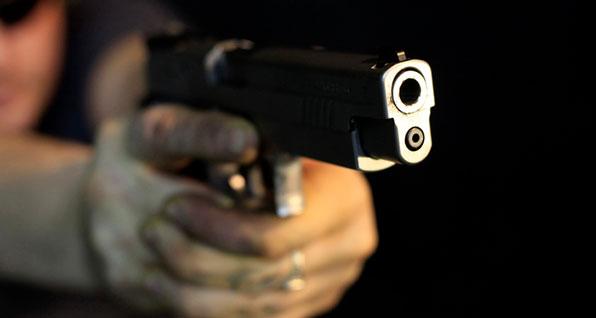 Crime happens anywhere and anytime. It was just before midnight Saturday when a man in his pickup truck was returning home with his two-year-old. He was almost home when he saw a woman walking on the side of the road. It was quite dark and cold on this rural road. The driver in his pickup truck stopped and offered the 49-year-old woman a ride. This is an uneventful good samaritan story so far.

The woman on the side of the road lived nearby. The individual in the pickup truck decided to drop his child off at home with his wife before he delivered the pedestrian to her home. The pickup truck had just pulled back onto the road in Elkrun Township, Ohio when it was struck from behind by a jeep. The jeep pushed the truck off the road. The driver in the truck looked in his rearview mirror and saw that the driver in the jeep had a handgun out the window with the gun pointed at the people in the truck. The vehicles stopped off the road in a wooded portion of this rural area.

The truck driver grabbed his firearm and got out of his truck. So did the driver of the jeep. Deputies reported that the jeep driver fired first before the armed defender shot his attacker several times in the torso. The attacker stopped shooting and fell on the side of the road. The defender stopped shooting and backed away. He called 911 and asked for help. The news reports don't mention when the defender put his gun away, nor do they mention where he put it.

Sheriff's deputies and emergency medical services arrived at the scene. The attacker was declared dead. The 49-year-old woman on the side of the road had been a passenger in the jeep. The 69-year-old driver of the jeep attacked her. She got out of the jeep and escaped by walking toward her home along the side of the road. The Sheriff said this incident started as a domestic assault and the driver of the pickup truck acted in self-defense. Sheriff Brian McLaughlin said, "I don't foresee any charges being filed."

The defender was shaken but not injured. He said he was glad that his child wasn't hurt and that he was praying for everyone involved.

This story is one of many that goes underreported by the mainstream media because it shows a positive image of a law-abiding gun owner using that tool to defend their life and family. It is our responsibility at AmmoLand to report these stories to you the reader. While we will continue to report these stories, groups like the Crime Prevention Research Center, led by Dr. John Lott, are fastidious in studying the use of firearms for self-defense. Stay up to date with all news on self-defense by following CPRC and AmmoLand.