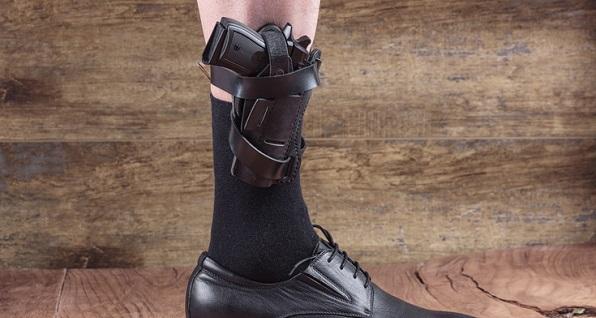 I’ve seen some recent articles on the internet talking about citizens with CCW permits carrying more than one gun in public. While I carry two pistols in uniform every day, I rarely carry a second pistol when I am off duty and on my own time. I have nothing against the practice, I just don’t feel the need to carry a second pistol very often in my personal life.

If you are going to carry a second gun for CCW, it’s important to recognize the gun’s proper role. Most of the articles I’ve seen advocating the practice have called these second guns “backup guns.” I think that term may be erroneously applied to many of the second guns carried by CCW permit holders and off-duty cops.

In my mind, a “backup gun” is one that can be relatively quickly brought into play if the primary weapon malfunctions, is damaged, is dropped, or runs out of ammunition. The backup gun also can come into play in the event the primary gun is inaccessible due to the fact that the criminal suspect is trying to remove it from the victim’s holster or the victim is being contorted into a bodily posture that would prevent the drawing of the primary weapon. As such, a hallmark characteristic of the “backup gun” is easy accessibility. To truly serve a role as a “backup” weapon, the gun has to be accessible to either hand in almost all body positions. That’s simply what’s demanded if you want to bring a second gun into play in the middle of a chaotic gunfight.

Other examples of poor backup gun choices or carry positions are derringers carried in wallets, or mini-revolvers stashed in secret carry locations like inside a boot or hidden inside a cigarette box carried in a pocket. Do you think you could instantly access those weapons while physically fighting someone or while shots are being fired at you? If you do, you are a better man than I am.

To be a true “backup” weapon the gun must be accessible. I’m looking for a gun/holster combination from which you can draw and fire in around two seconds at the range. If it takes you 10 seconds to draw and fire your “backup” gun, it really isn’t serving you very well as a “backup.” Most gunfights are over in just a few seconds. You’ll never dig that mini revolver out of your cigarette pack in time to use it in the fight.

That limits plain clothes backup gun carry locations to rear pants pockets, outside coat pockets, in the waistband, concealed on the belt, in a shoulder holster, or maybe in an ankle holster (good access in some positions, not so good in others). I don’t see many armed citizens carrying their “backup” guns in this manner. Most citizens who carry a second piece, tuck a really tiny pistol into a pocket or some type of hidden holster on their person. That isn’t really a good option for a gun that you are relying on in the event of a failure with your primary weapon.

That doesn’t mean that such tiny, hidden guns are useless. It means that their perceived role should instead be considered more of a “hideout” piece instead of a “backup” gun. Those little hidden pistols might be missed on a casual search if you are taken hostage during a robbery or kidnapping. They may also be used to arm a trained companion who happens to be unarmed. Think about a situation where you might be barricaded during an active killer attack. One could very easily see the utility of arming a second person with the “hideout” piece to prepare for your barricade being breached by the attacker. Better to have two armed defenders than just one.

When I carry a second gun off duty, I usually am carrying a tiny little Browning Baby .25 wrapped up in a bandanna in my front pants pocket. I have no illusions that I could get the gun into play quickly or easily in the fight. That gun instead has a couple very specific roles; I can use it to arm an unarmed companion or I can use it in the event that I have to give up my primary gun during some kind of a hostage situation. It’s not a true “backup” gun, but it does have some utility.

I have a friend who worked for a clandestine government agency during the height of the political violence and frequent kidnappings of foreign journalists in Beirut, Lebanon. He carried a small .22 revolver in a makeshift holster deep inside the front of his pants. He figured that he might have a chance to draw the gun at some point during a kidnapping attempt. That’s a fine role for a “hideout” gun. It’s not a great location for a weapon your are considering as “backup” to your primary firearm.

I don’t want to discourage any of you from carrying a second gun if you feel the need to do so. If you carry one, you need to acknowledge any weaknesses in both the weapon type and the carry location. You’re not going to smoothly transition to that little mini revolver you are carrying deep inside your boot during a typical gunfight. If you can’t get to it in less than two seconds with either hand, you’re probably not going to get the gun drawn before your fight is over.

It’s best to think of those tiny pistols more as an “ace in the hole” rather than a quickly drawn backup weapon.