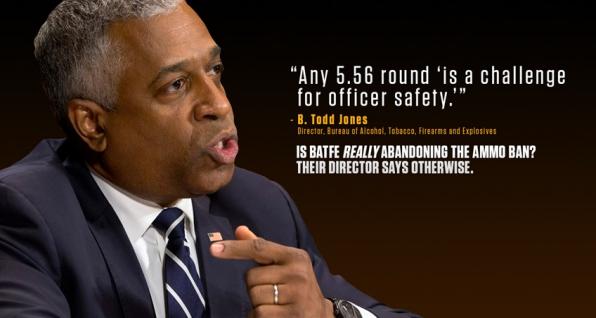 Editor's Note: Days after this article was written, news came that B. Todd Jones has resigned as Director of the Bureau of Alcohol, Tobacco, Firearms and Explosives (BATFE), ending what has been a tumultuous tenure as the agency head since July 2013. Given the Obama administration's record of pursuing a gun control agenda though the BATFE, there can be no doubt that the fight is NOT over - whether or not it is Mr. Jones doing the president's bidding.

Only two days after NRA and our members forced the Obama administration to table its ban on M855-type ammunition, BATFE gave gun owners notice that the battle over popular AR-15 ammunition isn’t over. On Thursday [March 12], BATFE Director B. Todd Jones testified before a Senate Appropriations Committee hearing, during which he alluded to BATFE’s continuing interest in reevaluating the legal status of a broad range of common ammunition.

In a leading question, the reliably anti-gun Sen. Chris Murphy (D-Conn.) asked the BATFE director, why the agency reviewed the status of M855 and other steel-component bullets. Jones’s response included this ominous assertion: “But as we see more and more of the firearms that could be classified as pistols, being able to use not just this M855 round, but any 5.56 round, it's a challenge for officer safety, public safety” (emphasis added).

Jones’s remarks suggest that it isn’t just M855-type ammunition that is on BATFE’s regulatory radar, but all 5.56-caliber ammunition. These comments could also signal that the administration would like to use innovation in the firearms industry as justification for an ever-widening ammunition ban.

Jones’ contention that .223 or 5.56-caliber ammunition fired from pistols poses a “challenge for officer safety” is not borne out by the facts. For 38 years, the FBI has compiled nationwide data on the characteristics of firearms used in fatal attacks on law enforcement officers acting in the line of duty. These data fail to document even a single instance in which a perpetrator killed an officer using a .223-caliber handgun. Contrary to the false statements of various gun proponents, moreover, .223 caliber handguns – including semiautomatics and derringers – have been commercially available since at least the early 1980s. As the Executive Director of the National Legislative Office of the Fraternal Order of Police recently stated, “Any ammunition is of concern to police in the wrong hands, but this specific round [i.e., M855] has historically not posed a law enforcement problem.

”  With favorable numbers of pro-gun senators and representatives in Congress, gun controllers have been reduced to using regulatory agencies to bypass lawmakers with contorted interpretations of existing statutes in order to pursue their federal agenda. In the remaining years of the Obama administration it is important that gun owners remain alert and mobilized to meet all attacks of this type. As the BATFE made clear with its initial framework for reclassifying M855-type ammunition, and again on Thursday, the Obama administration has every intention of pushing federal law to – and past – its limits in order to curb gun rights.

Following is a letter signed by 23 state attorneys general, including our own Ohio Attorney General Mike DeWine (R), objecting to the proposed ammo ban:

A Communication from the Chief Legal Officers of the Following States and Territories:

We, the undersigned state attorneys general of Alabama, Arizona, Arkansas, Florida, Georgia, Idaho, Kansas, Kentucky, Louisiana, Michigan, Mississippi, Montana, Nebraska, Nevada, North Dakota, Ohio, Oklahoma, Pennsylvania, South Carolina, South Dakota, Texas, Utah, and Wyoming, are writing to you regarding the “ATF Framework for Determining Whether Certain Projectiles are ‘Primarily Intended for Sporting Purposes’ Within the Meaning of 18 U.S.C. § 921(a)(17)(C)”, and specifically ATF’s proposal to ban the M855 5.56 x 45 mm cartridge. We applaud your recent decision not to issue a final framework on this proposal, at least for now, and we strongly encourage you not to revive it.

We represent our respective states as each state’s Chief Law Enforcement Officer, and in that role we directly oversee or work directly with numerous federal, state, tribal, and local law enforcement agencies. We, as much as anyone, want to do the utmost to ensure that our brave men and women that serve in law enforcement are safe. The proposed ATF ban on M855 5.56 ammunition, however, does not advance that goal. Instead, it threatens Second Amendment freedoms and deprives shooting sports enthusiasts of a popular cartridge for a popular rifle.

As an initial matter, ATF’s justification for proposing the ban is arbitrary and, if followed to its logical end, could be used to ban a wide range of rifle ammunition. As we are sure you are aware, just about any rifle round could theoretically pierce soft body armor under certain conditions. The M855 is not unique in this regard. And although concealable hand guns can technically be chambered in these rounds (even if very rarely), that is an insufficient reason to ban ammunition absent actual evidence that it poses a particular threat to law enforcement.

As law enforcement organizations such as the Fraternal Order of Police have recently described, the 5.56 M855 cartridge does not pose a particular threat to law enforcement. Indeed, we are aware of no examples in our states in which this round has been used against law enforcement in a concealed weapon.

Rather, the 5.56 cartridge (including the M855 variety) is used in the Modern Sporting Rifle (or AR-15) and is one of the most popular target shooting rounds on the market. It is also an effective round that ranchers and other land owners use to protect their land and livestock from predators and varmints. These are legal and productive business and sporting purposes of the 5.56 M855 cartridge that the Second Amendment protects. ATF’s decision to ban it would, simply put, be an abuse of its authority.

We strongly encourage you to reject this ill-advised proposal and uphold the Second Amendment rights of our citizens.