After the ATF's raid on a pair of California gun companies, many in the firearms industry -myself included- wondered just what changed the ATF's collective mind what morphed unfinished polymer AR-style rifle lowers into finished-and unregistered "guns". It was a matter of no small amount of speculation.

The speculation wasn't unfounded. It wouldn't be the first time the BATFE had suffered a reversal of opinion when it came to parts for AR-style rifles. Several items that were sold with ATF letters stating they were legal for civilian use have gone from favored to forbidden. The predecessor to the Slide Fire rifle stock is one that comes to mind. Owners found themselves recipients of letters from the ATF demanding they surrender their illegal parts- or be able to explain why they couldn't.

With the change of opinion regarding the polymer lowers manufactured by EP Armory, ten thousand- or more- purchasers may find the part they were told was legal suddenly...isn't.

Now, a letter circulating through the news media - and around the internet- from Earl Griffith, Chief, Firearms Technology Branch of the ATF sheds some light on the "why" behind the raids on EP Armory and Aires Armor.

The reason? If you'll look at the photo showing a pair of the now-apparently illegal polymer blanks, you can see where anyone wanting to convert the "blank" into a functional lower would be required to machine out the black plastic that fills the fire-control cavity. With that space filled, it's not a firearm. Unfilled; however, it is a "firearm".

The point of contention centers around the plastic filling that fire control cavity. The gun companies say the blank is created the same way as aluminum blanks - and the purchasers must be capable of machining them to make a functional lower- the only serialized part of an AR-style rifle.

The ATF, however, accuses them of splitting hairs -or biscuits, to be more exact. The ATF says that during the manufacturing process the "biscuit" is put into the mold and the plastic injected around it. When that's the process, the "blank" is never really a blank-even with the "biscuit" filling the fire control group's space.

With this explanation, the ATF's case is, according to industry observers, gets stronger and the California companies have been moved from an offensive to a defensive position.

It's still not settled, but it seems the latest twist favors the ATF contention. 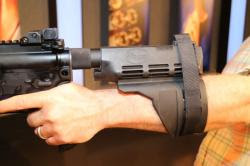 Which brings into question the ruling on Sig Sauer's SB15 Pistol Stabilizing Brace. It's a brace designed for buffer-tube equipped AR-style rifles. It is designed to fit over the buffer, then around an impaired shooter's arm. A velcro band then secures it to the user's forearm, improving the one-handed grip and making the AR a viable option for shooters with physical problems.

But it does look a whole lot like a shoulder stock slapped onto the end of an AR-style pistol. And a friend testing his first AR-pistol used a photo showing him using the buffer tube as a pseudo-stock. Boy that kicked off the questions- and concerns that he had violated the law.

Seems, however, that's not the case. A member of the Greenwood, Colorado police department sent an email to the ATF asking if shooting the pistol from the shoulder made it into an SBR.

The ATF -again in the person of Earl Griffith of the Firearms Technology Branch (FTB) sent back a response my friend had to find comforting. The fact that someone misused the pistol did not change its intended purpose or physical design characteristics.

Mr. Griffith's response even referenced the Sig Sauer SB15 Pistol Stabilizing brace, saying "certain firearms accessories such as the SIG Stability Brace have not been classified by FTB as shoulder stocks" - in other words, misuse doesn't change their intended purpose-or its classification under federal law.

That response came with a qualifier we'd all do well to remember: "However, FTB cannot recommend using a weapon (or weapon accessory) in a manner not intended by the manufacturer."

And there's a simple fact that remains - at this point it seems the ATF has a lot of latitude in interpretations of their rulings. In school, we used to call that the "rubber band ruler" - it couldn't really be trusted because it was subject to modification by the user.