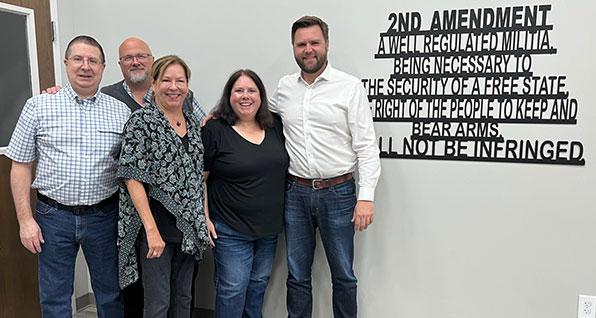 After a crowded primary in May for U.S. Senate, voters gave the nod to political newcomer JD Vance as the Republican candidate. Democrat voters chose current Congressman Tim Ryan as their candidate.

Until 2012 , Ryan frequently voiced his support for the Second Amendment. However, after Sandy Hook, that changed. He now embraces a full-throated anti-gun position. In addition to donating $20,000 to anti-gun groups, Ryan supports a host of gun control measures, including universal background checks and a ban on modern sporting rifles.

BFA PAC has given the grade of "D" to Tim Ryan.

A stark contrast to Tim Ryan is JD Vance. On Vance’s campaign website, he clearly spells out his stance on the Second Amendment:

Joe Biden and anti-democracy multinational companies are trying to find new ways to take guns away from law-abiding citizens. They’re making it harder to buy firearms and ammunition and imposing new, unconstitutional regulations on American citizens. I will fight the gun grabbers, whether they’re federal bureaucrats enacting regulations or multinational companies punishing people for exercising their rights. When a payments processor attempts to restrict Americans from buying firearms or ammunition, I’ll push back with federal legislation.

A lifelong gun owner, JD Vance was taught to shoot by his family in Middletown, Ohio. When first meeting with him over a year ago, I asked Vance what his stance was on the Second Amendment. His very quick answer was, "I usually shoot every week, but right now with the campaign, I only have time to do it once a month."

Recently, several Buckeye Firearms Association leaders, along with leaders of several prominent sportsman organizations, met with JD Vance for an open and frank discussion about issues affecting sportsmen and gun owners at the state and national level. Vance also shared the story about meeting his future in-laws in California, for the first time. What did he do? He took them all to the shooting range!

JD Vance is a paid member of Buckeye Firearms Association and the National Rifle Association. And on our 2022 candidate survey, he scored 100%, voicing support for key issues such as Constitutional carry, armed school staff, and limiting government authority over firearms during emergencies. He also indicated opposition to red flag laws and universal background checks.

BFA PAC is confident that JD Vance will support our Second Amendment rights and fight against gun-grabbers like Tim Ryan. With that, we are proud to endorse JD Vance for U.S. Senate, with an Aq rating. It is vitally important that gun owners make sure they are registered, vote in the general election on Nov. 8, and elect only pro-Constitution candidates.

BFA PAC will be announcing additional grades and endorsements for the 2022 election.

Linda Walker is President of Buckeye Firearms Association ,Chairman of Buckeye Firearms Association PAC, a Member of the Board of Directors of the National Rifle Association, where she sits on the Legislative Policy, State & Local Affairs Subcommittee, and Grassroots Development committees. She is an NRA-ILA FAL Frontlines Activist Leader, an NRA certified instructor, the 2009 recipient of the NRA's "Sybil Ludington Women's Freedom Award.” She is Co-Founder and Co-Host of the NRA Women’s New Energy Breakfast. Linda Walker was also a Co-Chair of President Trump’s “Gun Owners for Trump” national advisory board, both in 2016 and 2020.