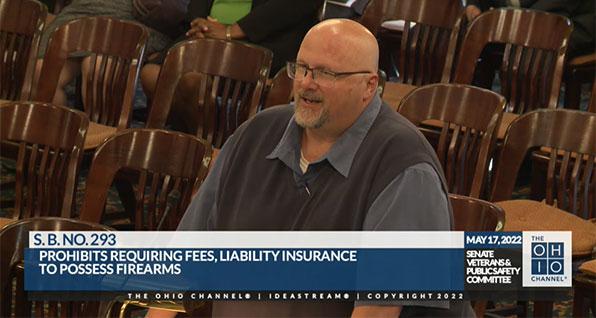 On Tuesday, May 17, 2022, Buckeye Firearms Association presented testimony in the Senate Veterans and Public Safety Committee supporting SB 293 to prohibit requiring fees or firearms liability insurance for the possession of firearms.

This was the second hearing for this legislation, sponsored by Senator Theresa Gavarone (R-Huron) and Senator Terry Johnson (R-McDermott).

Mr. Chairman, members of the Senate Veterans and Public Safety Committee, I am here to testify on behalf of Buckeye Firearms Association in favor of Senate Bill 293. Opponents of our Second Amendment rights are an inventive lot, continually seeking ways to get around constitutional protections to prohibit or restrict firearms possession and ownership. While some opponents of firearms rights seek to outright ban differing types of firearms, others take a more insidious approach by usurping our rights through government intervention such as attempts to levy taxes on individual rounds of ammunition.

A more recent example of this type of work have been efforts to pass laws in places like California, Connecticut, and New York to require anyone who possesses a firearm to purchase special liability insurance. This type of legislation is also being attempted in cities like Los Angeles and elsewhere.

This type of requirement would seem to be blatantly unconstitutional both federally and here in Ohio. But as we have seen recently, activist courts often warp constitutional protections.

The knowledge of these backdoor attempts to steal Second Amendment rights allows the Ohio General Assembly to get ahead of these efforts and bar the door against them. Similar to legislation that this committee has already passed concerning the powers of government during an emergency, Senate Bill 293 takes a proactive approach to this attack and simply spells out that gun owners in Ohio cannot be required to purchase liability insurance as a condition of possessing or purchasing a firearm.

Again, similar to the emergency powers legislation, which is still pending before the General Assembly, Senate Bill 293 allows Ohio to build a defense of firearms rights before they are infringed. Seeing the bad examples in other states should compel legislators to prevent it from ever happening here, and that is exactly what this bill does.

BFA greatly appreciates Senators Gavarone and Johnson for authoring this important legislation, and we encourage this committee to approve it at your earliest convenience. Thank you for your time.

SB 293 must move through both the Senate and the House in order to reach the Governor's desk for his signature. We urge committee members to move this bill quickly.