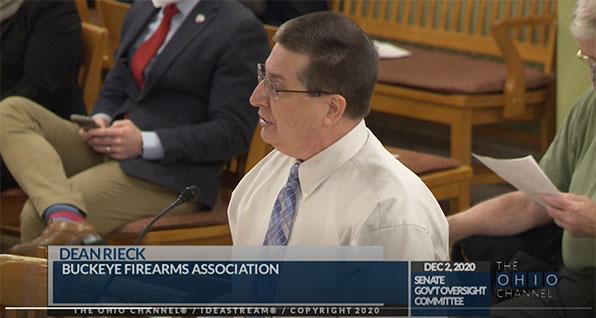 On Wednesday, Dec. 2, 2020, Buckeye Firearms Association (BFA) testified before the Senate Government Oversight and Reform Committee in support of Senate Bill 383, which seeks to remove the so-called "duty to retreat" from Ohio law.

Chairman Coley, and members of the Senate Government Oversight and Reform Committee. I am Dean Rieck, Executive Director for the Buckeye Firearms Association. I am delivering these remarks on behalf of our Legislative Affairs Director, Rob Sexton who was not able to be here today.

Buckeye Firearms Association is Ohio’s top defender of gun rights, working in both the legislature and in the courts to defend the 2nd Amendment. We’re very proud to be a supporter of SB 383, a proposal that is long overdue. We greatly appreciate Senator Johnson drafting a clean- and clear-cut repeal of Ohio’s Duty to Retreat law.

In matters of self-defense, the standard test for whether use of lethal force is justified is a near universal standard. You are legally justified to use lethal force when you are (1) not at fault in creating the situation and (2) have a reasonable and honest belief that you are in immediate and unavoidable danger of death or great bodily harm.

Unfortunately, in Ohio, the law confuses the issue with a so-called “duty to retreat.” This concept ignores the standard test for use of lethal force and injects a dangerous requirement to attempt escape before defending your life. This is illogical on its face because either you are in immediate and unavoidable danger of death or great bodily harm or you are not.

If you honestly believe you are about to die, it is cruel and absurd to expect you to attempt escape, delaying your own self-defense and putting your life in even greater danger. Ohio’s Duty to Retreat law is an injustice to victims of crime and an outrageous legal requirement.

Senate Bill 383 removes this duty in a clear-cut fashion. The standard for use of lethal force remains unchanged.

SB 383 would eliminate the sections of current law where my very right to survive a violent crime is undermined. Repeal of Ohio’s Duty to Retreat law is one of the two highest priorities of 2nd Amendment advocates, the other being Constitutional Carry, of course.

This concept has been heavily debated for several sessions, and the debate points are well known. That is why it is time for the General Assembly to take action on this clean- and clear-cut proposal.

Thank you for your time. I am happy to answer any questions you may have.

A companion bill has been introduced in the House. HB 796 had its first hearing on Thursday, Dec. 3, 2020. BFA presented testimony in support of that bill as well. With little time left in this legislative session, BFA urges swift action on both bills.