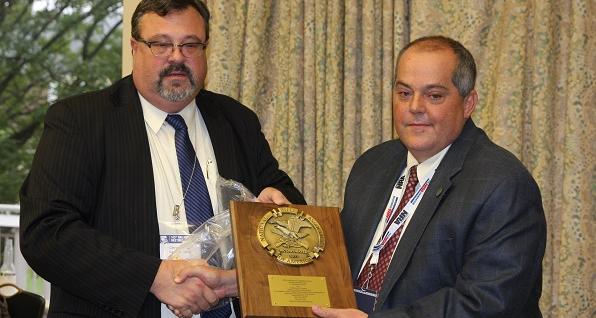 Buckeye Firearms Association Legislative Chair Ken Hanson has been recognized in recent months for his many years of service to protect and defend the Second Amendment.

At the 2016 NRA Annual Meetings and Exhibits, Hanson was further honored with the NRA-ILA Defender of Justice Lifetime Achievement Award.

A photo above shows Hanson (right) being presented the award by NRA-ILA Legislative Counsel Chris Conte.

Following is a press release issued to mark that special recognition:

For over a decade the NRA Office of Litigation Counsel has recommended no more than one person per year to receive the Defender of Justice Award for notable work in the advancement of Second Amendment rights. Recipients are selected for exceptional work at personal cost or sacrifice for the furtherance of the individual right to keep and bear arms through our legal justice system or academics. Past recipients have been large firm partners, solo practitioners, legal scholars and others each of whom contributed in some special and noteworthy way to the cause of individual liberty.

The 2016 recipient of this recognition however is exceptional not for a single act or even a series of achievements but rather for demonstrating a lifetime commitment to serving the cause of freedom through justice. L. Kenneth Hanson was previously awarded the Defender of Justice Award in 2008. The award this year however is different in that it recognizes a lifetime achievement, not won but earned by years of dedication and commitment to the cause of a free and peacefully armed population. Mr. Hanson thank you for your service and sacrifice.

The Defender of Justice

in recognition of his extraordinary efforts and commitment in

defense of the Second Amendment

The award states as follows: 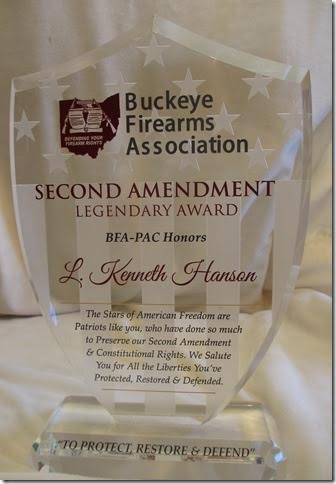 The Stars of Freedom are

to Preserve our Second Amendment

You for All the Liberties You've