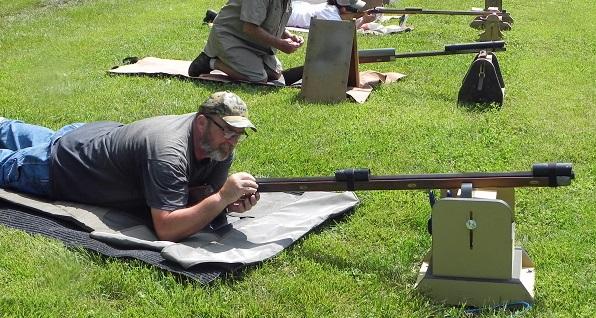 The dedicated group of black powder target shooters, with their unique target rifles, gather regularly on a Greene County farm. They are carrying on a tradition that began several decades earlier. They are the members of the Blue Jacket Muzzleloading Club. The tradition of their style of shooting, called chunk or over the log guns, traces its roots to frontier America. It is a very unique shooting experience still enjoyed across the eastern United States. This shoot was a special Donnie Linkhart Memorial Shoot, to honor his love of muzzle loading rifles and importance to the local club. It was started after Linkhart passed away following a battle with cancer. The club members also pay homage to a number of other black powder shooting enthusiasts who have also passed.

Butch Tobias, of Xenia, who is one of the founding members explains the club history, "The club was formed about thirty-years ago first under the name of Massie Creek Muzzleloaders. It was later changed to Blue Jacket Muzzleloaders. Linkhart provided the land for the range and did much of the work creating it. Following his death, the family has been gracious enough to permit us to continue to use the range. Over the years a lot of members have contributed to keeping this form of muzzleloading shooting alive. We are trying to share that heritage with younger people into the club. A lot of our shooters come from Kentucky, West Virginia, Tennessee and even Canada."

One of the earliest references for this type of shooting event is found in Sketches and Eccentricities of Col. David Crockett of West Tennessee, published in London in 1834. The author, James French, describes a Tennessee shooting match of 1831 involving Mr. Crockett. "Forty yards offhand, or sixty with a rest, is the distance generally chosen for a shooting match. If no distance be specified, this is implied. In all their shooting matches, no ball is allowed to count which is not found within an inch." This type of frontier shooting has developed into the chunk guns of today. The name of chunk or over the log gun comes from the use of a chunk of wood or a log as a rest in the prone shooting position.

The guns are very long barreled, typically 48-inches, black powder rifles, either in flintlock or percussion actions. The loads must be black powder with a patched round ball. Open sights are used and "shaders" to remove the glare of the sun from the sights are permitted. The most common guns are .45 and .50 caliber guns although others such as .32 or .36 caliber are sometimes seen. The roof over the loading area has to be high to accommodate the long rifle barrels and the ramrods required to load them from the muzzle. Competitors stand on stools in order to load the guns.

Scoring is done very precisely using equipment especially made for the purpose. Doing the scoring was Gary Tobias. He adds, "The target has the competitor number, the caliber of the gun and the round of the shooting event. We put a brass plug, which is made to the same size as the rifle caliber, into the bullet hole. The brass plus has an indentation in the exact middle. We use digital calibers to exactly measure the distance from the center of the bullet hole to the X in the center of the target. If the shooter takes out the center X we call that "shooting the spider". We have a clear overlay to align the target and get a correct measurement if the X is shot. We've had competitors shoot as close as .011 0f an inch to the exact dead center. This method insures there are no mistakes about the scoring. The score for each round is entered into an spreadsheet. The spreadsheet will accumulate the aggregate totals for the shooter and the entire match. There are individual paybacks each round plus a first, second and third overall the for event. We pay back 80% of the entry fees, only keeping enough for the club to pay for targets and any supplies to host the shoots. We also provide a framed "best X of the day" which provides some good, or perhaps very lucky shooter, with some bragging rights for the day."

Sterling Martin drove about 5 hours from his eastern Kentucky home to get to the shoot. He explains, in one of the best eastern hill I've heard in a long time, "Well I come up here because this is where the best competition is. You've got to shoot with the best. If you are going to play the game, you might as well play with all the gooduns. I'll likely get a little Ohio money to take back home. I shoot about 20 or so matches a year. All of them are a long way from home as nobody in my area shoots."

It's a combination of shooting event and simply friends enjoying themselves around the range. As with any shooting event, there are a number of tales told, some embellished by the teller about how well or, how poorly, someone shot on a particular day. Should a shooter screw up and shoot the wrong target, perhaps his neighbors target, it will be remembered and reminded for years! It is a close knit group of friends and shooters who keep the muzzleloading traditions alive It is great to see the members remembering and honoring those who participated before them.