BOOK REVIEW: American Gun - A History of the U.S. in Ten Firearms 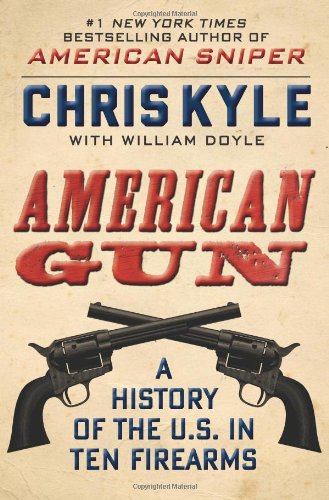 When it comes to my experience with guns, I seem to do things in the reverse of many people. I didn't grow up around guns, but became familiar with them as a young adult. While many become familiar with firearms through hunting, my own experience started with a desire for self-protection. Which, of course, means that while many begin shooting long-guns and eventually get around to handguns, I started on handguns and only later began enjoying shotguns and rifles.

When it comes to reading books by author Chris Kyle, I've done things in reverse once again, having read his second book, American Gun without having read his first, American Sniper: The Autobiography of the Most Lethal Sniper in U.S. Military History, which achieved #1 on the New York Times bestsellers list.

American Gun was published four months after Kyle, who was a United States Navy SEAL, was murdered by a friend and fellow veteran who was reportedly suffering from PTSD. The book contains a foreword written by his wife Taya, who, after her husband's death, worked with his editor to bring across the finish line a project Chris was so passionate about.

American Gun follows the history of the United States through the lens of ten iconic guns, which Kyle explains he picked "to serve as the flagship weapons for our tour of America's past." Noting in the introduction that they are his personal top ten, Kyle anticipates that gun-history buffs will no-doubt agree with some of his choices and disagree with others.

"Perhaps more than any other nation in the world," Kyle writes, "the United States has been shaped by the gun. Firearms secured the first European' hold on the continent, opened the frontier, helped win our independence, settled the West, kept law and order, and defeated tyranny across the world."

As noted, Kyle chose ten guns to help tell his story: the American long rifle, Spencer repeater, Colt .45 revolver, Winchester rifle, Springfield M1903 rifle, Thompson sub-machine gun, M1911 pistol, M1 Garand, .38 special police revolver, and the M-16 rifle platform Kyle himself used as a SEAL. Through them, Kyle revisits thrilling turning points in American history. While some of these turning points will be familiar to history buffs like myself, Kyle presents history about our great nation that many might be learning about for the very first time.

Ever read about a single rifle shot that helped turn the tide of the Revolutionary War? Kyle brings that story to life as he examines the history of the American long rifle, also known as "the Kentucky rifle."

Ever wondered what real-life battles inspired the climactic battle in the movie "The Patriot?" Kyle puts you on the field at the Battle of Cowpens, American long rifle in hand.

Still feel tears of pride well up when someone suggests we "remember the Alamo?" Kyle, a proud Texan, brings to life one Davy Crockett, a tall man with flowing hair wearing a buckskin suit standing on the wall firing his American long rifle with deadly accuracy, and hurling insults the enemy while calmly standing to reload. Kyle also take his readers for a ride along with Sam Houston and a contingent of uniformed Kentucky riflemen as they "remember the Alamo" and achieve their independence by exacting revenge on Mexican General Santa Anna.

Were you, like me, skeptical when President Obama claimed to shoot skeet "all the time" at Camp David? Perhaps you'll be more inclined to enjoy Kyle's account of President Abraham Lincoln, standing on the White House lawn one spring morning in 1861 testing various rifles that were being considered as the country's next infantry weapon. While some of you may have heard that story before, you may not know that at one point during his test, Lincoln was interrupted by an Army captain, shouting profanity as he came to investigate who was violating his commander-in-chief's order which forbid shooting in the capital city. Or perhaps you might be surprised to learn that, during another target shooting trip to the White House lawn firing range, Lincoln smithed a gun sight to fit another repeating rifle he had been testing, and then proceeded to use it to hit a piece of congressional stationary some 12 out of 14 times at a distance of 80 yards. On yet another occasion, Kyle writes, Lincoln showed up at target practice for the 2nd U.S. Sharpshooters, "borrowed a rifle from one of the surprised soldiers in Company F and scored three good shots as the men whooped and hollered."

One of the guns Lincoln tested that spring day in 1861 likely inspired his eventual choice of the Spencer Repeater, the second gun on Kyle's personal list of iconic American firearms. After documenting how a chief of Army procurement concerned about soldiers wasting ammo with the "newfangled gimcrack" used red tape, delay and obfuscation to sabotage Lincoln's wishes, Kyle documents how well the Spencer Repeater eventually performed in a decisive victory at Gettysburg. Kyle also wonders how history might have been changed had the Spencer reached more troops' hands earlier in the war.

Each chapter contains a wealth of interesting historical notes that are tied to the firearm Kyle is discussing, from Confederate battlefields to the Wild West, from Tombstone to Little Big Horn, from Teddy Roosevelt at San Juan Hill to Alvin York in the trenches of World War I, from the streets of Chicago to the mountains of Afghanistan, from the shores of northern France to the jungles of Vietnam, Kyle's book is fast-moving and highly entertaining.

While I won't attempt to document them all here, I would point readers to perhaps my favorite of Kyle's historical accounts, told as he documents how the Winchester 1873 rifle was used on October 5, 1892 by citizens in Coffeyville, Kansas to stop a band of notorious bank robbers known as the Dalton Gang. The account of the Second Amendment-enabled "urban" battle is riveting. In the end, Kyle writes, "one by one the Dalton boys were shot to pieces."

"In deciding to stop the robbery, the citizens had drawn a big red line, not in the sand, but across the West. The country was to be wild no more. Law and order would prevail."

It took Kyle's description of how the attempted assassination of President Truman by Puerto Rican revolutionaries armed with semi-automatic 9mm pistols was thwarted by White House Police and Secret Service officers armed with .38 special revolvers to help me understand a bit more why Kyle included this pistol on his list. I'm not convinced at all, however, that it would go on mine.

Before you think the book is only about the history associated with the firearms, I should also mention how well Kyle displays his obvious knowledge of firearms, as he details the mechanics of each gun, and documents their evolution in design as demand and technology advanced. Kyle's expertise in the area of combat experience is also evident, as he discusses the tactics used in the various battles he documents.

In her foreword, Kyle's widow writes, "In the last year of his short life, Chris was able to reflect on the varied experiences he had with guns and the way he used them through every stage of his journey. As you read American Gun, I hope you feel the presence of Chris with you. As you take a walk back in time with him, I hope you feel the excitement he had as you explore the remarkable role these guns had in shaping our great nation."

Click here to purchase American Gun - - A History of the U.S. in Ten Firearms and support Buckeye Firearms Association with your purchase through Amazon.com!