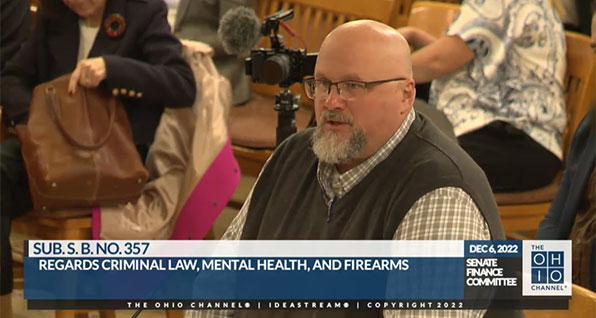 SB 357 has been referred to as "Strong Ohio Lite," referring to legislation from the previous legislative session which we also opposed, and which failed to move.

Among other provisions, SB 357 seeks to introduce "safety protection orders" and "seller's protection certificates," and to introduce a new "co-signer requirement" for 18-21-year-olds to purchase firearms.

Here is the text of BFA's opposition testimony.

Mr. Chairman, members of the Senate Finance Committee, I am here to testify in opposition to Substitute Senate Bill 357 on behalf of Buckeye Firearms Association. BFA protects the constitutional rights of Ohio’ 4 million plus gun owners to keep and bear arms.

While there are many reasons BFA opposes Senate Bill 357, my testimony today will specifically address two. While proponents continue to seek a method to keep firearms out of the hands of the mentally deranged, the bill in front of us creates an undefined process for doing so, that seems wired to result in the lifetime loss of firearms rights for people who don’t deserve it.

The bill would allow employers, public schools, colleges and universities, or a community not only to request a Behavioral Risk Assessment, that would result in the loss of a person’s constitutional rights for their entire life. It also even allows them to make this determination themselves. The reason the system seems wired to result in the loss of firearms rights is this: What entity, be it a school, college or employer, wants to be the one that failed to conduct such an assessment after any disagreement that resulted in tension or high stress? Which entity wants to be the one that fails to take that step that ultimately results in school or workplace violence? Which entity wants to be held financially liable for failure to take this action? The answer is not many, if any, and the consequence of this factor will be the loss of firearms rights based on this fear.

Government has already created schools and workplaces where the fear of litigation results in ridiculous decision making on a regular basis. Senate Bill 357 would open the door to this sort of activism to the basic right of a person to keep and bear arms. At the same time, the bill doesn’t spell out a clear and understandable process for how this would occur. This seems to be a ready-made challenge on the basis of the 14th Amendment, equal protection under the law, for each person who would be subject to the loss of their basic rights. Senate Bill 357 attempts to address this flaw by setting up a judicial process a person could utilize to ask a court to overrule the result of a Behavioral Risk Assessment.

This approach falls short on several levels. Along the same lines as the previous flaw, what judge wants to be the one who overrules a Behavioral Risk Assessment that culminates in a tragedy? Who would take that risk on themselves? The answer is again, not many, if any. Elected officials typically don’t take risks, and restoring the rights of a gunowner, who has unfairly lost their constitutional rights, would be too big of a risk. It would just be politically safer to leave such a ban in place. It is not hard to see how Senate Bill 357 is hardwired to result in the unfair loss of second amendment rights.

Too often government attempts to address criticism of a proposed law by providing for judicial review in case the newly created system gets it wrong. In this case, we’re talking about a scenario in which the newly created system unfairly seizes someone’s fundamental and constitutionally protected rights of self-preservation. Your right of redress is to go to court against the state of Ohio. To hire a competent lawyer and go into court to prove you’re not a risk to yourself or others. To prove it enough to convince a judge to risk his or her political neck. And all of this on your dime. At your expense. When government provides this type of redress, it often forgets that hiring a lawyer is very expensive. An expense the government doesn’t have itself, because the taxpayers fund it.

Suppose the average person can afford such an expense. Does being poor automatically relegate you to having no redress to correct an unfair result of a Behavioral Risk Assessment? At least in a criminal case the court must provide an attorney to a defendant at government expense.

The second fundamental flaw in Senate Bill 357 is its provision to deny younger adults their constitutional rights. The bill would prohibit the sale of a long gun to an adult, unless they have a “voucher” from another older adult. Much like the previous issues, the person doing the vouching is required to sign they’re unaware of any behavioral risks, yet again setting up the question of who would want to take on the responsibility for the behavior of another person?

And of course, the more fundamental question, which is what right does the state of Ohio have to restrict the constitutional rights of an adult, who has been deemed responsible enough to vote, and to make the ultimate sacrifice for their country? Some would argue that the state of Ohio already does that with handguns, and that is true. But I would strongly argue that is also unconstitutional.

The use of Behavioral Risk Assessments to determine the rights of Ohioans to retain their fundamental rights, and the denial of these same rights to younger adults are the two most objectionable aspects of Senate Bill 357. As this session comes to a close, this bill is not the right approach to addressing the concerns about the awful acts of violent criminals. BFA asks this committee not to move forward with this legislation. I thank the committee for the opportunity to testify, and am able to answer questions that you may have.