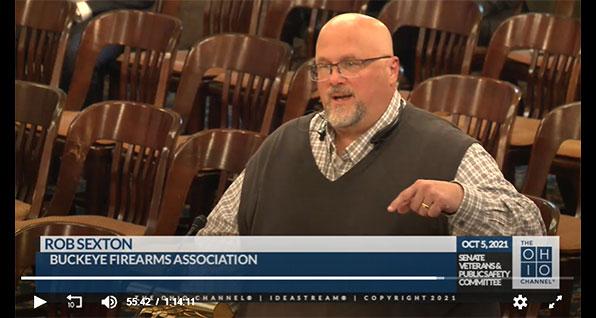 Along with the National Rifle Association, Firearms Policy Coalition, law enforcement officers, and others, Buckeye Firearms Association testified in support of the bill which seeks to bring Constitutional Carry to Ohio.

The bill would not eliminate the current Concealed Handgun License, but simply make it optional for law-abiding gun owners.

Below is the text of our testimony. We have also discussed Constitutional Carry in two recent episodes of our Keep and Bear Radio podcast.

Chairman Hoagland, members of the Senate Veterans and Public Safety Committee, I am Rob Sexton, the Legislative Affairs Director for Buckeye Firearms Association. BFA is civil rights organization that has been defending and advancing the rights of over 4 million Ohio citizens for more than 15 years, with a long and proven record of changing laws for the better.

I am here to express our strong support for Senator Johnson, and Senate Bill 215. This bill would remove many burdens on law-abiding gun owners which do nothing to reduce crime or saves lives.

SB 215 would create what is often referred to as Permitless Carry, License Optional Carry, or Constitutional Carry, which is the ability for law-abiding adults to carry a concealed firearm without licensing or other mandated requirements. This change alone would remove irrational and unnecessary and unconstitutional burdens for Ohio citizens who merely wish to exercise their Second Amendment rights and defend themselves when faced with a lethal threat. Ohio’s constitutional framers were crystal clear on this matter. Article 1 Section 4 states, “The people have the right to bear arms for their defense and security.”

SB 215 Does NOT Change Use-of-Force Standards

The standard for when use of lethal force is legal for defense of self or others is uniform throughout the United States. It is generally summarized in this way: “You may use lethal force for self-defense when you have a reasonable and honest belief that you are in danger of immediate and unavoidable death or great bodily harm.” This standard will NOT change in any way with SB 215.

Those who do not carry now with a license but choose to start carrying after a license is no longer mandated are of no concern. If they're not carrying now without a license because it's illegal, and they're waiting for it to become legal before they carry, they are obviously law-abiding.

That is why research has shown that enacting a license optional carry law does not result in increases in gun crime. The bottom line is this: criminals don’t care about permits and licenses. They’re behavior is going to stay the same … criminal. And the law abiding will continue to respect the law as they always do.

Many people will continue to go through the permitting process for reasons such as state reciprocity. But a permit shouldn’t be mandatory for someone who doesn’t have that need.

Interest in carrying a firearm and firearms training is at all time highs. People are genuinely and legitimately worried about their own safety and want to take steps to protect themselves and their loved ones. They’re seeing the spikes in violent crime. They’re seeing constraints on law enforcement.

Women and African American people are among the fastest growing segment of firearms purchasers. A person who lives, works and drives through areas that have recently exploded in violence should not have to complete government paperwork, submit to a background check, take a class, and then wait on the government to exercise a right guaranteed by the state of Ohio. A woman in an abusive relationship should not have to apply for emergency privileges to carry before she can carry a gun to protect herself or her children. These things became even more clear over the last year and a half as many of our sheriffs were unable to process permit applications over COVID restrictions.

This really is a fact-based debate. The law abiding are not a threat to others in Ohio or in any other state. They do not become law abiding because the state confers upon them a license. Subjecting them to unnecessary requirements does not make them better people. It just burdens them with extra costs. Meanwhile, those who would do us harm ignore these same laws. It is for these reasons; we ask this committee to move SB 215. I thank you for your time. I am happy to answer any questions you may have.