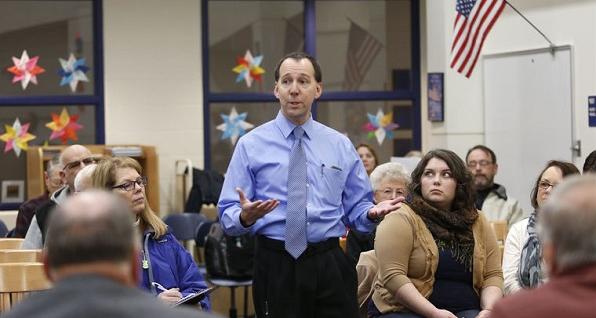 On Saturday, January 24, Buckeye Firearms Foundation President Jim Irvine and Joe Eaton, Program Director of the Foundation's Faculty / Administrator Safety Training & Emergency Response (FASTER), were given the opportunity to address the Lake Local Board of Education about the matter of school safety.

From the Toledo Blade (which editorialized against the idea of arming staff to protect students the day before the meeting):

Representatives from Buckeye Firearms Association, a statewide advocacy group that promotes Ohioans’ rights to carry firearms, were invited by the school district to deliver an hourlong presentation about their free program to train teachers and other school personnel how to handle guns and defend against possible school shootings.

“Right after Sandy Hook, we started putting as much money and resources as we could into providing this type of training to any school district that has teachers willing to be certified to carry a concealed weapon though the program,” he said, referring to an elementary-school massacre in Newtown, Conn., in 2013.

Eaton informed the group that, so far, more than 300 teachers and administrators, from various districts statewide, have participated in FASTER training. Again, from the article:

Jim Irvine, president of Buckeye’s board of directors, said the training helps school staff know what to do if they are confronted with a lethal situation.

Asked by a board member why such training is necessary with the Lake Township Police Department just a mile away from Lake middle and high schools, Mr Irvine responded: “That’s wonderful, but is a mile away close enough?”

According to the Blade, it was noted in the meeting that while Lake Local has a police officer in the building most of the time, that officer can be called away to off-campus incidents. Irvine told the board about a recent student plot at a different Ohio school district that local police foiled before the plan was carried out.

Police later learned the “kids were planning to kill the resource officer first,” he said.

According to the article, Lake Township Police Chief Mark Hummer has told the board he was willing to work with them no matter what they decide, and suggested that his department be included in any training of school personnel and recommended ongoing training beyond the three-day course Buckeye offers.

The Blade article also made note of opposition expressed by the Ohio Coalition of Gun Violence, who apparently waged an email campaign directed at the Board of Education in advance of the event. Group representatives were in attendance but were not invited to speak.

"The issue is can we do something better, something more, in the event of an horrific situation where somebody get in and try's to shoot and kill our kids," said Tim Krugh, Lake School Board President. "At a minimum require someone to go through concealed carry training and then enroll in the buckeye fire arms faster program which is a 3.5 day intensive training program."

"It is not OK for people to sit around and wait to be murdered in a school. It is OK to fight back and it is OK to start saving lives and to keep yourself alive," said Joe Eaton of the Buckeye Firearms Association.

"The one thing for certain we've seen is that these teachers will die for our kids. They've shown that time and time again. What we want to do is if a teacher is wiling to stand between somebody murdering kids and to die for those kids is give them any tool that they want to keep themselves and these kids alive."

The educational content of the training program was discussed only generally Saturday, as it's important to keep certain aspects confidential, said Jim Irvine, president of Buckeye Firearms Association.

The names of those permitted to carry weapons on school property would likely also remain secret with the exception of the board, certain administrators and police. Irvine said he doesn't even keep a full record of those who have participated in the training in fear that the names could be made public and make those people "targets" in the event of a school shooting.

According to the Sentinel-Tribune, at least one other school district had someone present who was interested in learning about the subject as well.

Sue Larimer, a Perrysburg school board member, told the newspaper she wasn't directly representing the board but wanted to take information back for discussion.

"I would rather be the person in the theater who is able to protect others than to be the sitting duck," Larimer is quoted as saying.

While many such meetings have occurred in school districts around the state, this one is receiving news coverage because Lake Local Board of Education president Tim Krugh chose to announce the forum.